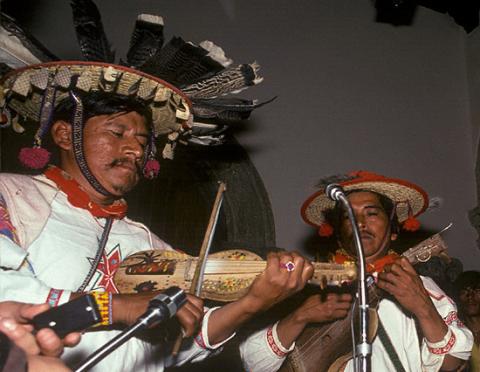 Juan Ríos Martínez is known in Huichol as Taurri Mutuani, or “Painted Red.”. He told me he was given this name at birth in 1930 because of his skin pigmentation.

This artist’s sense of Huichol culture was closely tied to his extraordinary performances on the Huichol xaweri (locally manufactured violins prized by the talented natives who have adopted them). He was known and acclaimed throughout the Huichol Mountains by many of their greatest musicians. At the age of nine, he started to stand in for his father, who was famous for playing at ceremonial celebrations. His father was a son of Inés Ríos (see the biography of Guadalupe González Ríos); thus an important musical tradition flowed through Juan Ríos’s veins. He became a devotee to the kieri[1] at a very young age to improve his skills as a musician.

When we met Juan Ríos, in the early 1970s, he had been forced to leave his native territory of Carretones de Cerritos, Nayarit, because of family conflicts and was living near Compostela. In this environment, he found it difficult to cultivate on his ranch or practice the deer hunt. He commented, “I consider my devotion to the deer the foundation of my spiritual strength. When I find a live deer, I suck its saliva and eat it, because I believe he is also giving me something useful, some grace. As a witness to this are these thoughts of mine that are manifested as yarn paintings.”

There were two types of yarn paintings for him: the first was easy to make and sell in the city, because it had no history and represented no spiritual drain (loss of iyari, or heart/memory). But he became ill after a while of producing these decorative pieces, and an uncle who was a maraakame told him, “It is because in Tepic there is a god who is the Virgin of Guadalupe and also Jesus Christ, and that you are playing, making your money without paying your dues.” Following his advice, Juan Ríos took candles and money to the temple of Tepic and, having fulfilled his vows and paid his dues to these mestizo deities, he recovered his health.

The second type of yarn painting produced by Juan Ríos was more daunting, because it “takes a lot of thought”; it contains the iyari of the artist and it is “made of one thread of yarn at a time.” Only these works, significant down to the last detail, arouse the attention of Our Ancestors; they force the artist to renew his traditional devotions and pay homage to the ancestors he invokes. We journeyed to Wírikuta together on one occasion, and Ríos absorbed more information from his peers as he continued to fulfill his vows. 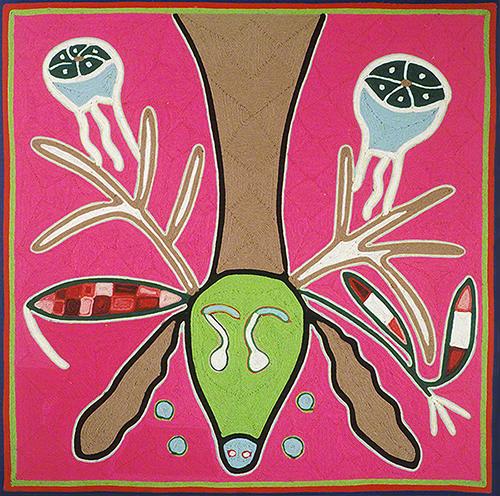 Juan Ríos Martínez fills spaces with large, sensuously curved figures. His paintings express the physical experience of both field labor and ritual disciplines. The mythological context is humanized by a dramatic expression of emotion, which is not evident among other Huichol artists. The warmth in his use of line and color is unsurpassed, as seen in The Head of Our Elder Brother Blue Deer (2' × 2', 1973).

In other masterpieces, he expresses the terrifying realm of Huichol mythology and its understanding of Takutsi (Our Great Grandmother) Nakawé (as an insatiable were-beast). As the first part of her name indicates, she is the primordial procreating ancestor, partly symbolized in her alter ego, Takutsi Metseri: the moon that waxes and wanes. The artist evokes the drama of an all-enabling provider turning into an overwhelming brute force. 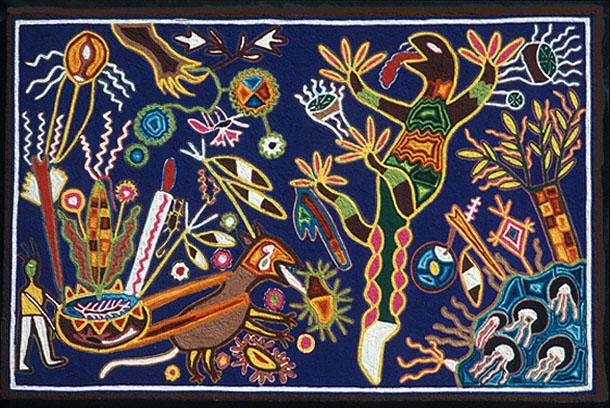 Another series of 14 works depicts The First Pilgrimage to Wírikuta; it contains some of the artist’s best work (4' × 2½'). His vision as expressed in this series has been compared to that of Henri Matisse or Rufino Tamayo.

After two or three years of creating yarn paintings with iyari, Juan Ríos began to suffer from doubts. At night his dreams were filled with the presence of Our Ancestors and threatening nahuales (animals by which a person may become possessed), which he depicted in his paintings the next day. He had been investigating the history of the great battles of the ancestors of the Huichol with the giants who first lived on this earth and who became predators of early humankind.

Finally, his nightmares became too overwhelming, and he decided to return to making decorative yarn paintings, i.e., commercial crafts, which he could execute at less spiritual cost. The problem was that Juan Ríos, according to his own peers, remained involved with the cult of the tree of wind, whether he wanted to or not, and he never completed his vows. Thus, according to their tradition, he died (in early 1996) because he failed to revisit the kieri. Medical sources attributed his death to chronic liver ailments.