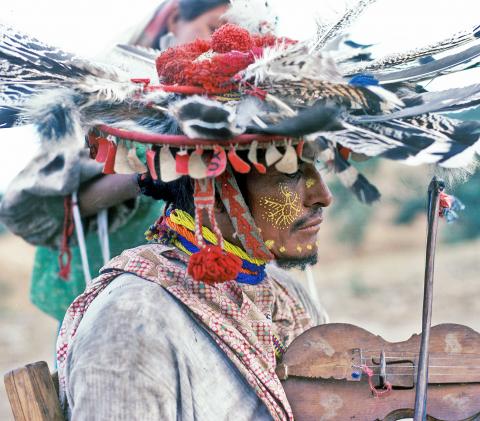 Pablo Taizán de la Cruz is also known by his Huichol name, Yauxali, which means The Garment of Our Father (Sun). He was born as a member of the subgroup called Wautüa, from the community of San Sebastián Teponohuaztlán, Municipality of Mezquitic, Jalisco, around 1936. He spent most of his youth in its southern branch called Tutxipa, or Tuxpan de Bolaños, Municipality of Bolaños, Jalisco, where he developed a traditional ranch with his brother and pilgrimage companion, Pancho Taisán de la Cruz. (Historically, Tutxipa was probably a separate branch of Huichol, who had most of their land expropriated by the Spaniards in the late eighteenth century. They found refuge among their Wautüa siblings, until they recovered some of their old grounds at the end of the nineteenth century.) They are both half-brothers of José Benítez Sánchez and experts in the shamanic arts, capable of leading pilgrimages to remote sacred spots and chanting sacred praises to Our Ancestors that last for days and uninterrupted nights. They are healers as well.

The maraakame (chanting and healing shaman) can represent Our Ancestors as they are: in the esoteric symbolism of votive objects like urute, votive arrows, and xucúrite, gourd bowls; nierikate, wooden disks decorated with yarn; and memuute or tepárite, standing or round sculptures in stone. Long, intimate experiences of the sacred allow the shaman to draw precisely from a great range of symbols to describe his visions in properly assembled ideographic compositions.

Yauxali began to lead ceremonial chants after some twenty years of uninterrupted discipline and pilgrimages. Many of his foot pilgrimages have traced the entire path from the coast in the West to the eastern holy land of Wírikuta, as well as through the northern and southern sacred spots. His discipline includes periods of salt fasts and abstinence from sex with his two wives that last up to half a year.

In 1975, during a pilgrimage in which Yauxali was my guide to the cave of Tuamuxawi, the First Cultivator, survivor of the flood and ancestor of mankind, I was struck by the beauty of the carved wooden image of a deer’s head. Yauxali informed me he had carved it and brought it there as an offering on a previous pilgrimage. He had “seen” the deer head as a vision after fainting from exhaustion while cultivating his fields. Tuamuxawi “spoke” to him, requesting that he reproduce the head and take it to his sacred dwelling.

Following subsequent pilgrimages, in 1977, Yauxali and his brother Pancho (also known by his Huichol name, Matsuwa, which means “wrist-guard”), began a special project with me to produce stone carvings of the sacred figures of Our Ancestors. These were to be kept as a repository of symbolic guideposts for future generations of Huichol. I founded La Asociación para la Preservación Del Arte Sagrado Huichol, A.C. (The Association for the Preservation of Sacred Huichol Art, incorporated as a nonprofit organization) in Guadalajara, Jalisco, and received funding for the purchase of the first sets of standing sculptures, memuute (singular: memuú); and the round sculptures that accompany them, tepárite (singular: tepari). Cultural Survival, Inc. in Cambridge, Massachusetts, provided most of the initial funding through Friends of Huichol Culture, Inc., both nonprofit organizations.

Yauxali also began to make yarn paintings in 1978 as part of an effort to explain the role of Our Ancestors and of their symbols in Huichol sacred history. He became a rare exception among yarn painters: an expert maraakame who approached his work as a master of purely sacred art. His output was sporadic, and his explanations were couched in esoteric shamanic vocabulary. The best of his art contains the same energy and sincere conviction of Guadalupe González’s finest pieces, as if a hidden magnetism guided his hands, and the artist allowed himself to become an impassioned intermediary for the messages of Our Ancestors. Yauxali’s greatest yarn paintings are meant for people initiated in Huichol culture, but their archetypal beauty breaks down cultural barriers with its universal appeal.

His second wife, Kuaynulie, who accompanied Yauxali on most of the pilgrimages, along with his brother Matsuwa, José Benítez, and myself, also created a few remarkable paintings, and so did Matsuwa. Some of these works are at the Radford University Collection in Radford, Virginia, including a number of works by the artists examined here, such as José Benítez, Guadalupe González, Juan Ríos, and Tutukila.

There, in the retreat center on campus, is Tatei Niwetsika, Our Mother Corn, standing erect in volcanic white stone, next to her tepari, a round carved stone shield through which she can perceive her realm. These are Yauxali’s only publicly displayed sculptures outside of Mexico. Yauxali sculpted these pieces and their appropriate symbolic offerings: a votive arrow, a gourd bowl, and an accompanying nierika. The art collection was donated to the university by the Kolla-Landwehr Foundation in 1996.