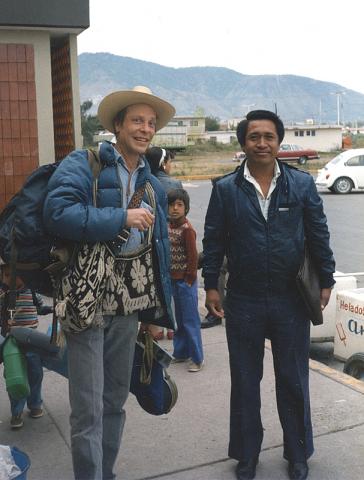 Tiburcio Carrillo Sandoval was born on a ranch in Tuapuri,[1] one of the most traditional Huichol communities, in 1949, where he received the name Niukame, or “Sprouting Corn”.By the time we met in 1972, he had adopted the pseudonym Tutukila, derived from tutú, a yellow flower that is associated with corn, and kila, the action of beating the cornstalks with a stick to release the pollen or dust before the harvest. In 1963, he became one of the first members of his community to begin a formal education, which he had to pursue outside the Huichol territory to finish seventh grade. This way he civilized himself in mestizo[2] culture.

He started making yarn paintings as an apprentice to a fellow tuapuritánaka (member of the same community), Andrés Valenzuela. He commented, “Andrés never wanted to teach me how to work properly, but by observing him I dedicated myself to forming certain figures, as a game or for a decorative effect. With time my designs improved, although they remained crude.”

In 1964 he went to Guadalajara seeking work as a craftsman. There he met the unforgettable craftsman and artist Ramón Medina, who was working with Father Ernesto. Ernesto Loera was then the head of the Franciscan Mission of Zapopan, on the outskirts of Guadalajara. Medina, whose compositions were treatments of meaningful themes, hired Tutukila to assist him in making yarn paintings.

After four months, Tutukila returned to the highlands, seeking to further his knowledge about his own culture by asking his father pertinent questions. His father responded by telling him that he would give him the proper orientation later if he showed an earnest interest in his people’s history. Consequently, Tutukila pursued his religious education by visiting the sacred spots of Our Ancestors in the Huichol Sierra.

Tutukila interviewed elder wise people in his community, but he emphasized, “Even in these last few years, none of them has ever told me the truth; so I have relied on my own insight and the teachings of my father.”

While he worked with me, Tutukila had to perform special rites and sacrifices for revealing aspects of his culture to an outsider, which he did in the hope that the Huichol culture would receive more respect and recognition. He introduced me to life in the most remote parts of the Huichol Sierra, and my wife and I eventually became the compadres of two cousins of his, Totopika and Hautsima.  Totopika held considerable prestige as the Secretary of Communal Goods; he was the intermediary for the Huichol with the federal government and managed to make personal contact with President Luis Echeverría to help his people.

My close bonds to an inner member of this community helped me gain their sympathy later. When Totopika died in 1979, the community asked me by consensus to be its adviser in blocking the government’s efforts to take away their land and to plunder their forests in collusion with private lumber companies. The mutual understanding between Tutukila and me was formed within a vast context of interactions, which drew me to serve among his people even to this day.

Tutukila stressed the ethic of not revealing the truth to those who have not reached religious maturity through active practice and rigorous devotion on a long-term basis. Our Ancestors often achieved their ends by resorting to trickery and by testing those who sought their help. Today the wise shamans, having gained their knowledge through penitence and discipline, will not instruct others who seek knowledge gratuitously, especially youngsters who would earn a living outside their culture by prostituting the mysteries of their own heritage.

Along with José Benítez, Tutukila was in the 1970s the main inspiration for the evolution of yarn paintings into a serious art form depicting the Huichol tradition. However, his approach to the medium reflected a different background than that of José Benítez, and a more didactic viewpoint.

When Tutukila collaborated with us from 1973 through 1975, he produced an epic history of the feats of Our Ancestors in a series of yarn paintings that averaged 10 per story. He incorporated carefully gathered information from close relatives who were noted shamans. He was recognized for his peerless craftsmanship, which he used to carefully detail important symbols and to forcefully represent the prototypal figures of Our Ancestors, thus influencing changes in the style of his fellow yarn painters.

His intricate manipulation of detail gave more realism to his figures than is found in the work of José Benítez and others. He slowly formed the figures in his compositions, working with great application and concentration, without sketching any outlines on the beeswax (unlike Benítez). Even when creating large paintings, he rendered all the major features of each figure before beginning to form the next one. The color field that surrounds his figures follows their contours carefully, creating unique linear patterns that radiate from their forms and integrate them into the overall composition.

Tutukila’s vibrant, harmonious textural approach confers an inner vitality on his figures. The Petrified Figure of Our Grandfather (Fire) (2' × 2', 1973) and The Power of the Kieri Is Tested (4' × 2', 1974) are two examples of his diverse style. He found it difficult to enlist the help of equally meticulous apprentices, and worked mostly by himself or with his wife Turuima.Tutukila’s art is more reflective and style-conscious than José Benítez’s, partly because he aimed to depict his themes in faithful detail. He viewed his art as an effort to capture the significance and richness of his culture, having been made painfully aware that other Mexicans and outsiders regard his people as ignorant members of an inadequate society. He hoped mestizos and young Huichol would come to realize the depth and validity of their culture.

“We cannot develop well among the mestizos because they don’t understand our religion or our culture and they don’t realize how we would suffer, if we lose our traditional ways and become just like them. But I say it is not right to lose everything that is ours in exchange for something we can’t defend. Outside culture is important, but so is ours. I believe we are losing it, now the young are losing their very language!”

Tutukila eventually chose to use his teaching credentials to become a supervisor of the National Indigenous Institute’s bilingual school programs in the state of Nayarit. This situation conflicted strongly with his more deeply held feelings, and he began to drink too much. He died on June 27, 1997, from a heart failure and liver ailments, according to his last wife, Margarita.