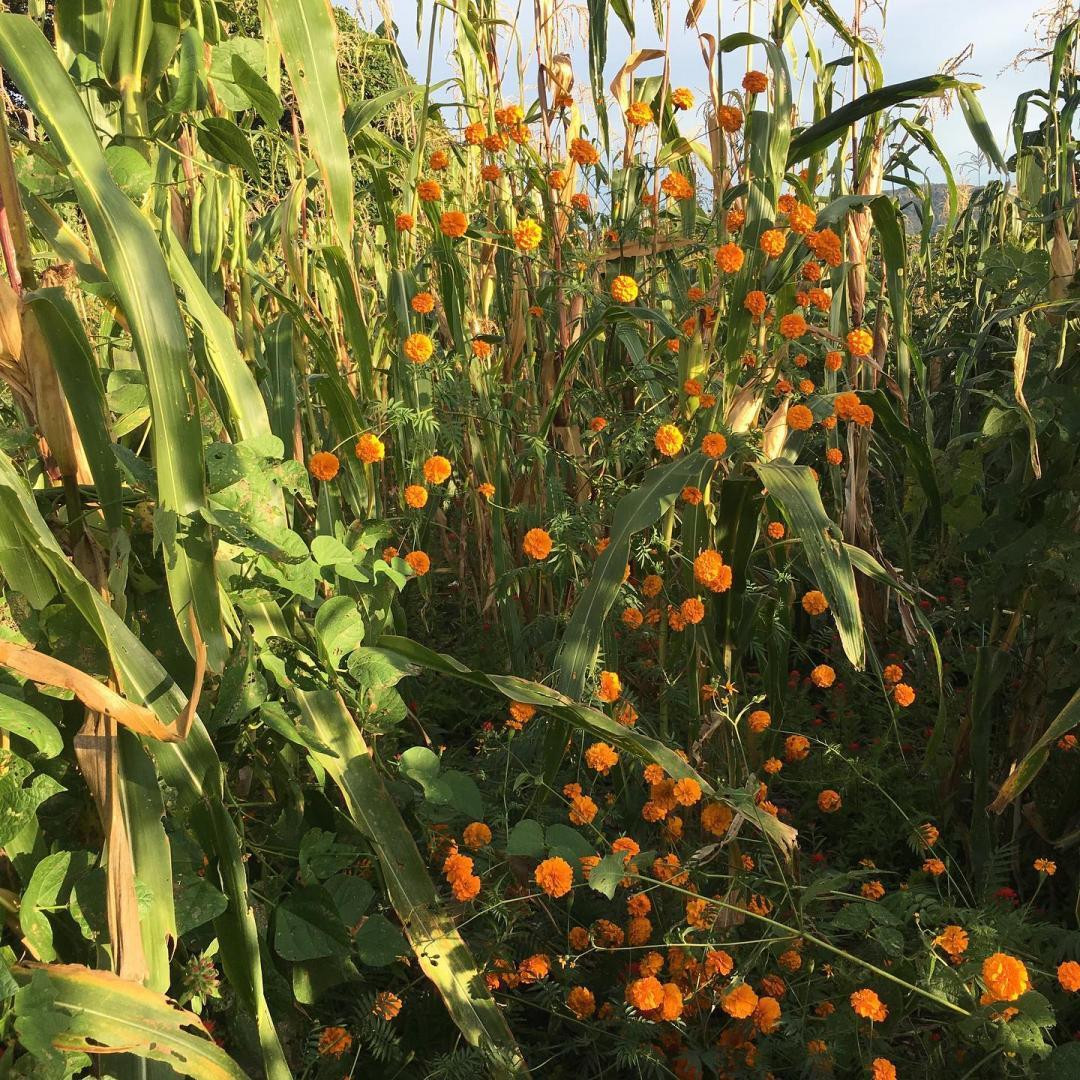 We hope you have all been well and are off to a good start this fall. The rains were generous in the sierras this year and it looks like the harvests of corn, beans and squash will be bountiful, although in some areas it rained so much that some corn and squash rotted. Right now, it is a palate of shades of green and many beautiful colors from the wild flowers in bloom. The Wixaritari have enjoyed harvesting a wide variety of wild mushrooms, a seasonal treat, which have been abundant. We thank our friend Mele Carrillo López, for sharing a couple of photographs he took of his wife and son harvesting and cleaning mushrooms in the Community of Tuapurie. 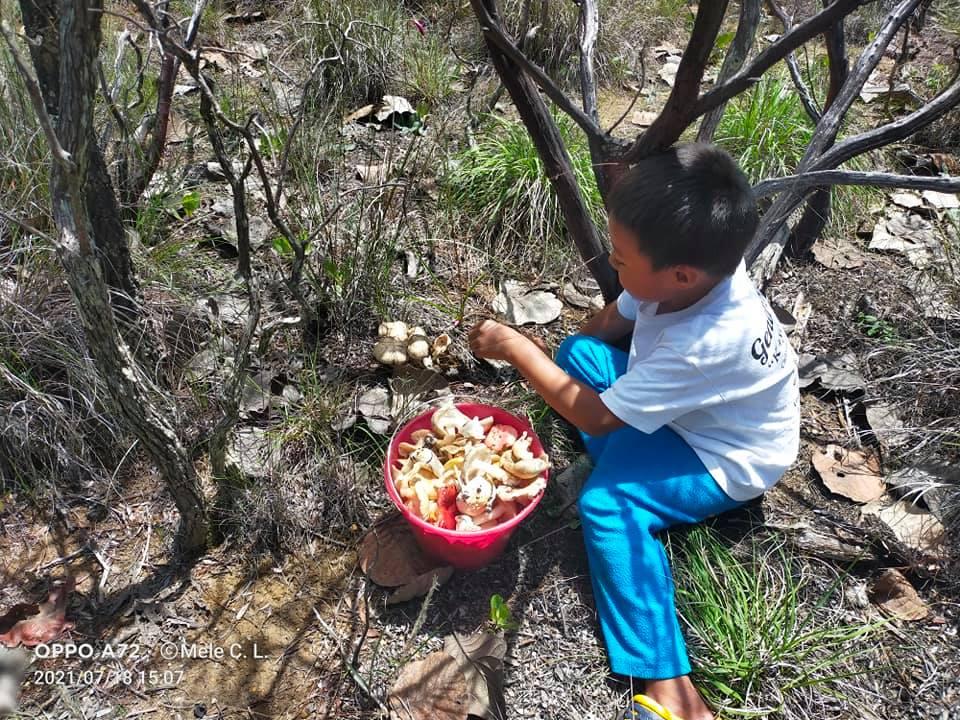 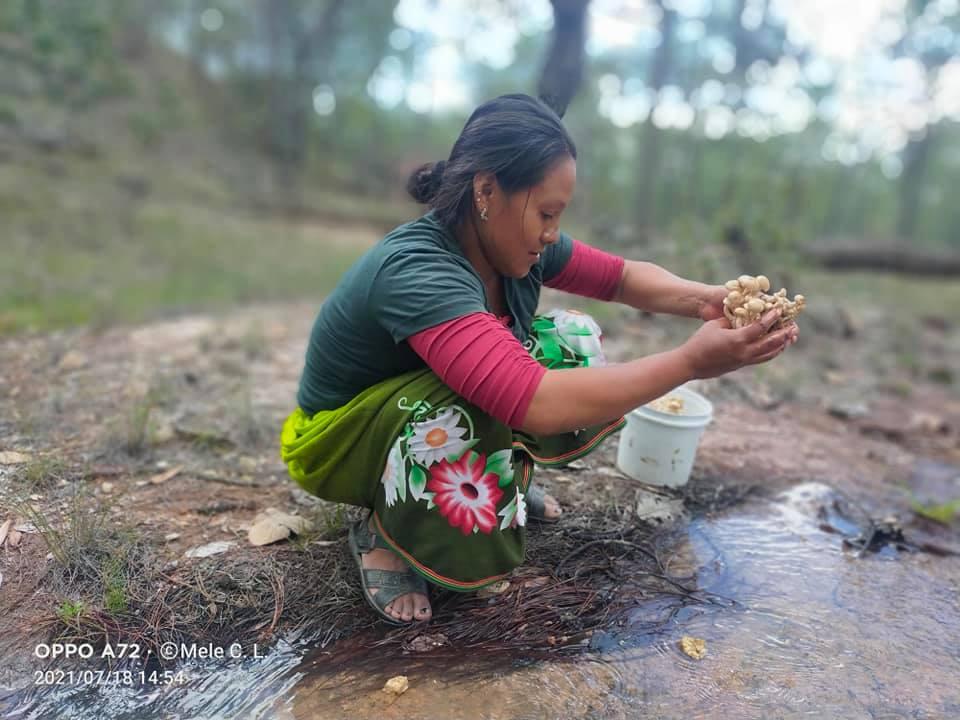 During the month of August, we disbursed scholarships of $7,000 pesos ($350 USD approximately) to 8 returning students and 12 new applicants, for a total of 20 students for the 2021 – 2022 school year. We understand that one of the most valuable aspects of this scholarship is the opportunity for these students to become part of a network of fellows who can bring academic and career support to one another. In the spring, we began with a “Cafecito virtual” activity where students can virtually meet one another and discuss a series of matters that are on their mind. Stay tuned for the “Huichol Scholarship Fund” Newsletter on our website and for upcoming student profiles.

Two young Wixaritari, who received scholarships from WRC, and who completed their studies in the last two years, have just received the State of Jalisco’s top award given to youth who have excelled in their studies and civic participation. This award, “Premio Estatal a la Juventud”, which comes with a prize of $40,000 pesos (approximately $1,918 USD), was given to seven young adults, two of whom we supported when they were students. We are very proud of the two Wixárika who received this award: Isaías Navarrete for his academic excellence and Tanima Enríquez for her civic leadership. 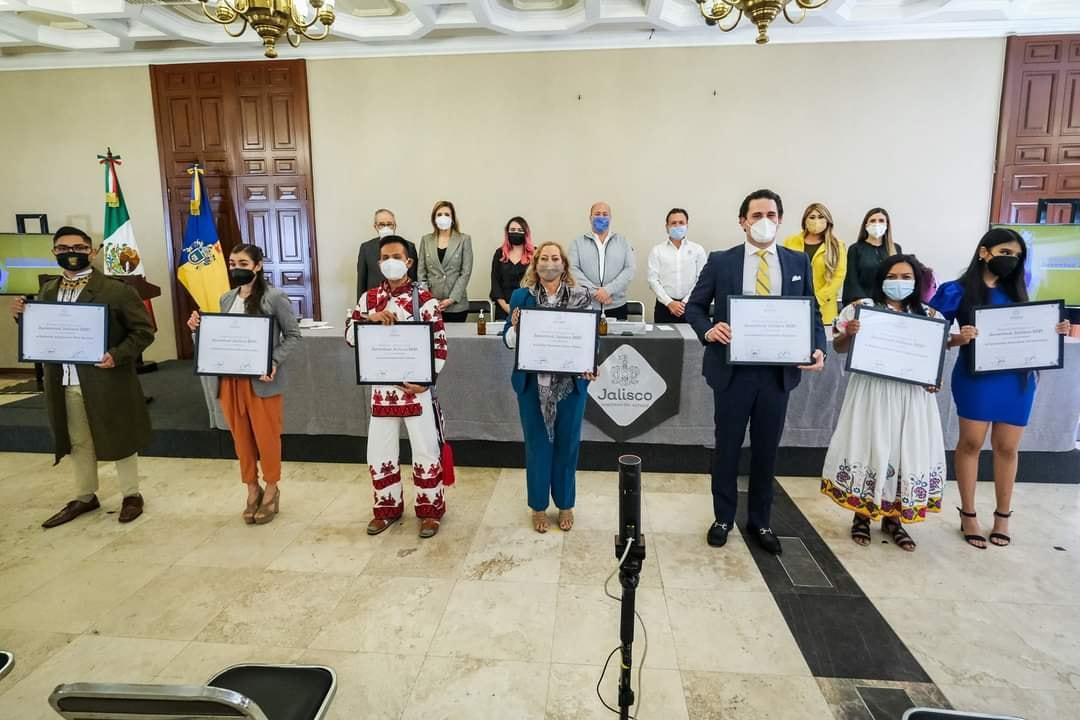 Isaias Navarrete Chino graduated this year with a degree in Forestry Engineering from the Universidad Autónoma de Chapingo, considered the top university for natural resource management in Mexico. Isaias also has numerous certifications for additional studies he completed over the past few years. In 2019, he was invited to the University of New Mexico to attend a seminar on Identity & Community Leadership, and he has participated in forest management trainings in various communities. He was an exceptional student and has a passion for environmental sciences and the conservation of forests. 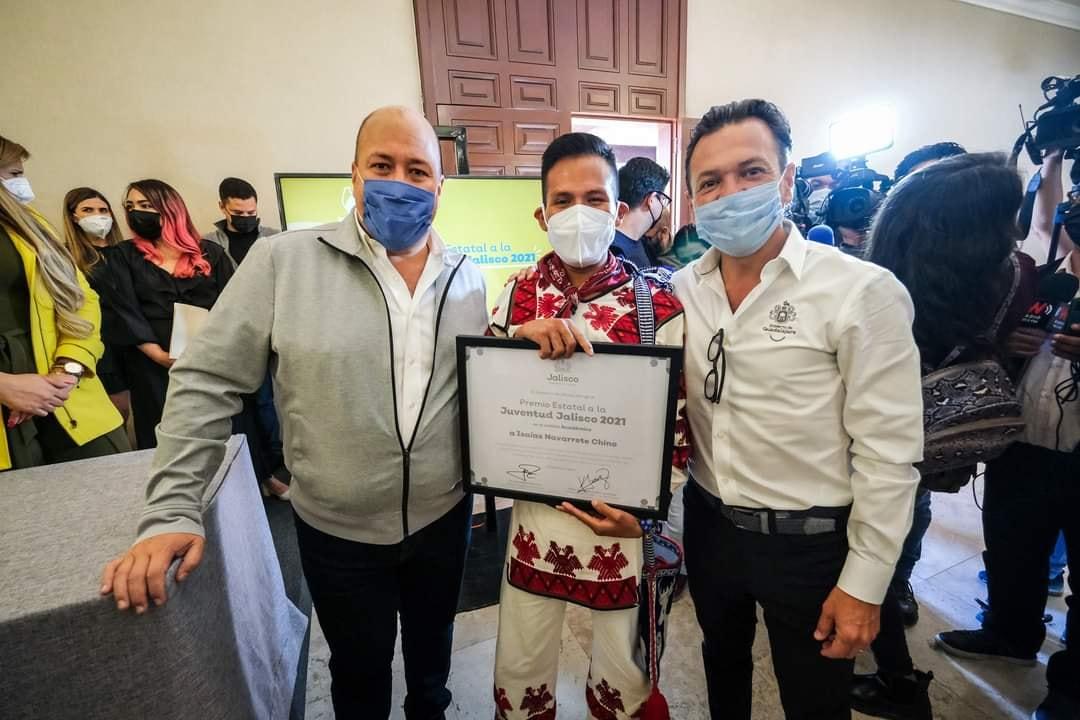 He is currently involved in a reforestation project in the Wixárika community of Wautia (San Sebastián Teponahuaxtlán) and its annex Kuruxi Manuwe (Tuxpán de Bolaños). Most recently, Isaías participated in the first training for our Agroforestry Project in Wirikuta and, along with another scholarship recipient, Carlos Carrillo, he is developing a week of forestry trainings in the neighboring Wixárika community of Tuapurie (Santa Catarina Cuexcomatitlán). 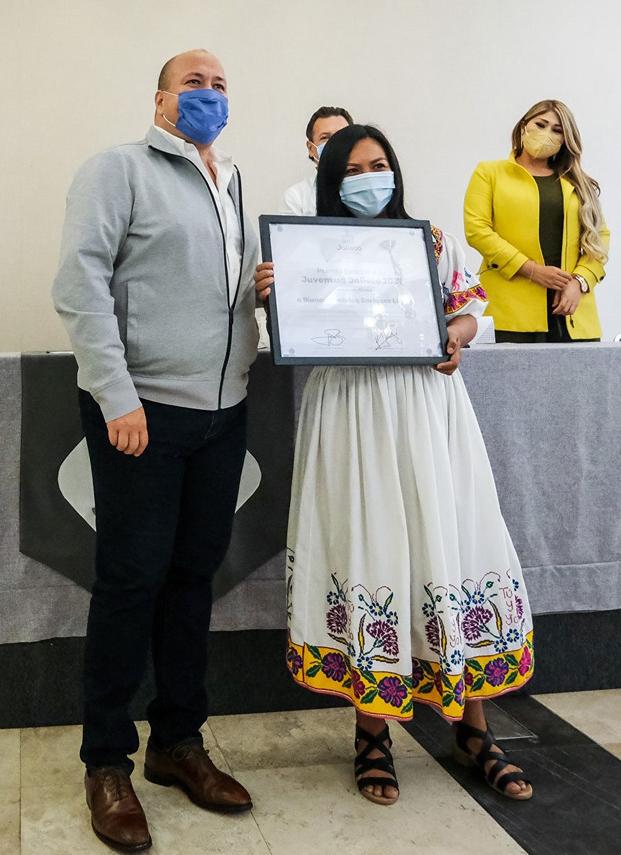 Bianca Tanima America Enriquez graduated in 2020 with a degree in Law from the Universidad Enrique Rebsamen and has since found a series of opportunities that have led her into political organizing and human rights outreach. In June of 2021, she ran for political office with the independent party Futura while working for the Jalisco State Commission on Human Rights. This November, Tanima began a post as the first Indigenous woman legislative aid for a state congresswoman and is working in the office of “Igualdad Sustantiva” that deals with gender, race and linguistic equity. Some of her most recent activities include doing outreach with Wixárika women to address reproductive education and equity.

The Wixárika Research Center was invited to participate and present our work and projects to the Community of Tuapurie and the Consejo Regional Wixárika for the Defense of Wirikuta at the community’s bi-annual General Assembly on October 21st through 24th of 2021.

Diana Negrín traveled to the sierras where she spent 10 days in Tuapurie. She addressed the General Assembly, which was attended by 718 members of the community, and informed the people about our work on the various archives of Juan Negrín, the development of the online archive and website, the Agroforestry Project in Wirikuta and our scholarship fund. The community and the Consejo Regional Wixárika for the Defense of Wirikuta, unanimously approved of our work and the authorities issued a legal document stating their agreement and commitment to work and coordinate with the Wixárika Research Center. The document was signed by all of Tuapurie’s elected traditional and agrarian authorities.

As some of you might recall, a group of small farmers from Wirikuta sent a petition to be presented at the General Assembly in Tuapurie, requesting the Wixárika rain chanters travel to Wirikuta to perform ceremonies to call the rain. The petition was approved and several ceremonies and a deer hunt were carried out over the course of several months. Between climate change and agribusiness dispersing the clouds, there had been little rain and with their crops failing the small farmers were struggling to survive off their lands. We are happy at the news that this rainy season they received abundant rain in Wirikuta – more than in the past 12 years!

Update on the Agroforestry Project 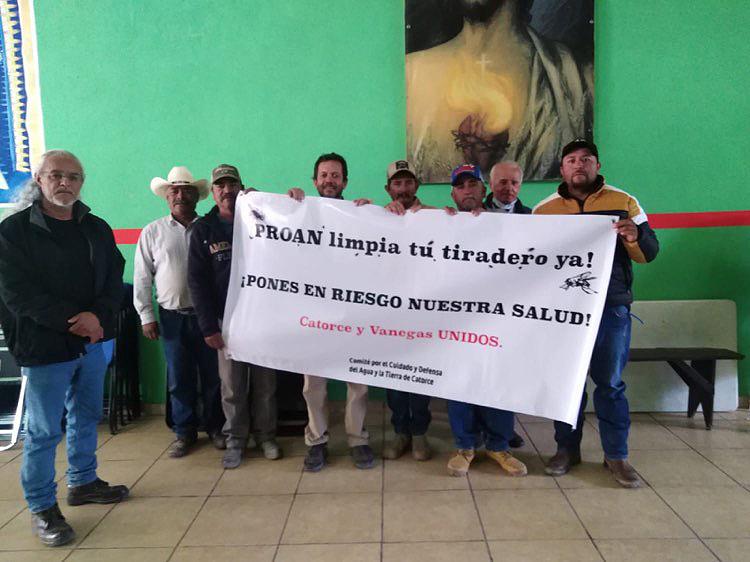 Since 2010, we have been involved in the effort to protect Wirikuta from mining and other devastating mega industries. In coordination with Cultural Survival we carried out an international letter writing campaign to address Mexico’s President and his Ministers, requesting the cancellation of the mining concessions. Soon thereafter, with assistance from Cultural Survival, we helped arrange the participation of Wixárika leaders and legal experts at the United Nations Permanent Forum on Indigenous Issues in 2011.

The work of the mining industries was stopped thanks to an injunction the Wixárika won in the Mexican courts but other industries have installed themselves over the years and are causing enormous destruction.

The Agroforestry Project we are coordinating is intended to be an alternative to working for the agroindustry operating within the Wirikuta bio reserve and also offers opportunities for dialogue and knowledge sharing between Wixaritari and small farmers through workshops and agroforestry. This spring and summer Wixárika youth and small farmers who live in Wirikuta participated in planting the first plot of land with alleys of mesquite trees, agave, corn and beans. The participants also took part in a workshop on the uses of mesquite and learned how to grind and ferment agave midribs or “pencas” to produce forage for the small land owners’ goats, sheep and cattle. During the last week of October, we confirmed that the mesquite and agave have firmly set root. Although they are still small, they have grown new branches and leaves and out of 160 mesquite trees we planted only one died.  As for the corn and beans, they grew well with the abundant rain but were ravaged by a pack of wild pigs just prior to harvest. On a positive note, they did not damage the mesquite or the agave which represent our biggest investment. We are now looking at different kinds of fencing to keep the feral pigs out next year.

Some future activities being planned are to till and incorporate the organic matter from the corn and beans into the soil, stake the mesquite trees, fertilize the mesquite trees and maguey plants with goat manure, apply a layer of mulch and install a low metal fence to protect the corn and beans from the feral pigs and coyotes. We will send soil samples from this first plot to be analyzed at a laboratory so we know what minerals are deficient and to give us our base. We will also soon share our programming for 2022, which will include a series of free workshops and cultural exchanges in Wirikuta. Stay tuned for our progress!

A Tragic Loss of Life 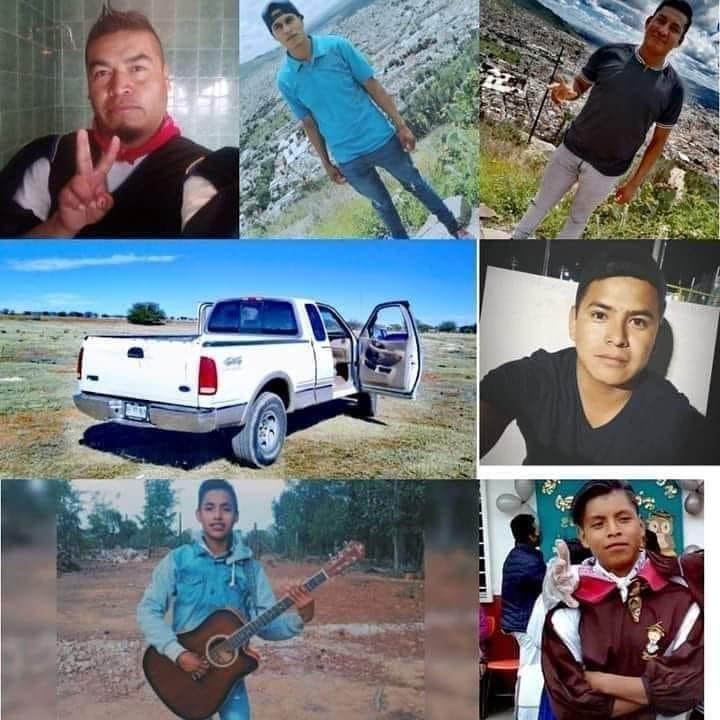 2021 has marked a year of intense insecurity for Wixaritari from all communities as the region is consumed by organized crime. On September 22, six young men from the community of Tuapurie went missing on their way back to Nueva Colonia from a traditional deer hunt. They had remained in constant touch with their families and in their last phone call, said they were leaving Monte Escobedo, Zacatecas on their way to Mezquitic, Jalisco. They were never heard from again. Several days later, the bodies of two of the missing were found outside of Monte Escobedo hanging from a tree. Their bodies showed signs of torture. One of them was only 16 years old and the other had just graduated from college. Days later two more bodies were found in the area of Valparaiso, Zacatecas. Two of the disappeared are still missing and there is an Amber Alert out for the one who is 15 years old. It has been a painful loss for the families and for the community of Tuapurie as a whole. We will probably never know what happened that provoked the murders of these innocent people, but what we do know is that the area is extremely dangerous because rival cartels are battling each other for control of the area and its roads.

We offer our condolences to the families of these six young men and hope that the two that are still missing are found. If they too are no longer alive, we hope their families will finally be able to lay their bodies to rest and have closure.

Next year, we need to upgrade our website platform from Drupal 7 to Drupal 9. As we are a bilingual archive this will entail quite a bit of work and some financial investment. Drupal 7 is being retired and security patches will no longer be issued after November 2022. Aside from the security of our website, the big advantage we'll have with Drupal 9 is that it will be far easier to upgrade to future versions thanks to the new migration feature that was first released in Drupal 8. We ask you to please support this important work through donations to our general fund.

Other news and links:

Nexos has just published a second article on Wirikuta, written by Diana Negrín and illustrated with photographs by Juaquín Urrutia. Here is a direct link to the article:
La miseria de los megaproyectos y las semillas de la esperanza | Crisis ambiental (nexos.com.mx) For those of you who do not read Spanish, we hope to post an English translation of this article soon and will send you a link via email once we do. In the meantime, we suggest you use Google Translate.

As 2021 ends, we ask you to please remember us if you are able to make a charitable gift towards our work this year. No matter how small, donations add up and make a big difference. Credit Card donations through our website are secure and we ask you to consider the option of signing up to make a monthly donation to support our work.

If you buy through Amazon, go to smile.amazon.com and choose the Wixárika Research Center as your charitable organization of choice and we will receive a donation equivalent to 0.5% of your purchase.

The Wixárika Research Center is a 501(c)(3) non-profit corporation and all
donations are tax deductible to the full extent of the law.