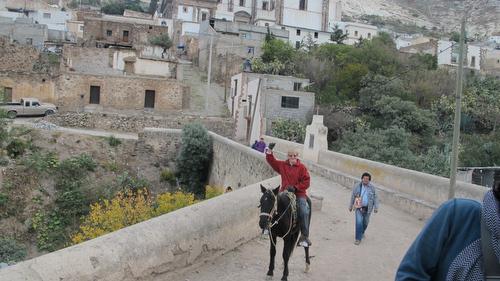 REAL DE CATORCE, Mexico – From the moment Maude Barlow passed under the crumbling stone arch and saw the first nopalera laden with red cactus fruits, she knew she was entering another dimension. Accompanied by a retinue of Huichol leaders, activists and a wandering journalist, the Canadian author, public speaker and social leader was making her own pilgrimage to the Birthplace of the Sun. It’s a journey the Huichols or Wixarika people have made for over a thousand years, coming to reconnect with the ancestors, light the candles of life and pray for the balance of all life on Earth.

Maude’s mission was a different one. She had come to see for herself what was at stake in Wirikuta, this most sacred of Huichol holy sites, currently slated for exploitation by Canadian mining companies.

Her goal was to connect with the people being affected by these mining proposals and see what, if anything, the social action groups she leads can do to help. She had come to Mexico to participate in the Permanent People’s Tribunal regarding the devastating effects of mega-hydroelectric projects throughout the region. And she wanted to investigate first-hand some of the impacts of Canadian mining companies in Mexico.
“We Canadians feel embarrassed and ashamed of what is being done in our names,” she had said on the winding cobblestone road to this place. She had just paid a visit to the sad vestiges of Cerro de San Pedro, the colonial mountain town whose fate the defenders of Wirikuta hope to avoid.

The iconic Hill of San Pedro, featured on the flag of the state of San Luis Potosí, is no more, and the charming colonial village that was once at its foot is a virtual ghost town. A battalion of heavy machinery gnaws its way through the surrounding hills, reducing them to rubble. Meanwhile, a 24-stream of trucks belonging to New Gold, a Canadian mining company, rumble back and forth down the dusty country roads, carrying the rubble to be ground into powder, which will be leached in cyanide and other toxic chemicals to extract the gold.

Despite its embattled past and present, the town has retained a poignant charm. Maude was captivated by the ride into the tiny village square. The hills surrounding us were honeycombed with ancient footpaths leading up into stony ruins, inhabited by a surprisingly verdant semidesert ecology: towering nopal or prickly pear, laden with ripe purple and cream-colored tuna or cactus fruit, various relatives of the mesquite, organ cactus, barrel cactus, agave, maguey. We climbed up a quiet hillside where an anti-mining activist had been laid to rest in the shade of a pirul tree, with a spectacular view of the town

Mario Martinez, a mining company engineer turned anti-mining activist, was our charming guide. The energetic Martinez has dedicated nearly two decades to the fight to save San Pedro, and has nearly paid with his life, more than once. He showed us a vintage photo of the cathedral that hangs on his wall, with the famous San Pedro Hill in the background. I carry it up to the roof where I compare it to the current landscape. The eyes struggle to comprehend the loss.  To continue reading follow link below...