The Founding of the World: Before the Flood 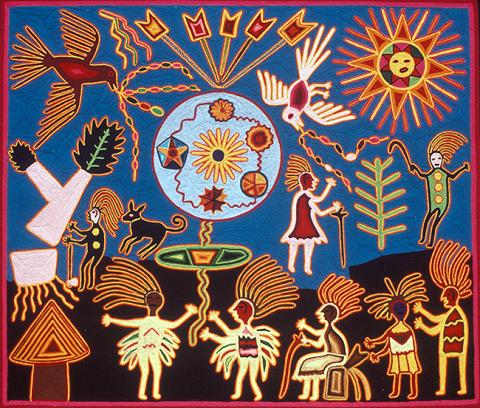 Life in the world began in the darkness of the Underworld, near the coast.  The land sloped upward with any feature; no rivers or mountains existed.  The wisest beings in those times communicated by telepathic means, they were unable to see each other, and they were called hewixitari.  They were the ancestors (figures left to right in the black area) whose names were Tamatsi Kauyumarie (Our Elder Brother Fawn of the Sun), Tamatsi Maxakuaxí (Our Elder Brother Deer Tail), Takutsi (Our Great Grandmother, the oracular spirit of germination), Tatéi Yurianaka (Our Mother who-feeds-off-her-own-veins-to-live, i.e. fertile earth), and Tatewarí (the patron of tai, fire, whose name means Our Grandfather). The sacred instruments of their powers were kept in their xiriki, the shrine seen at lower left.

Takutsi knew that a disaster was forthcoming.  In preparation, she had each of her companions make a nierika, a sacred design symbolizing their divine being.  This done, they set out upon a path upwards from the coast (wavy line between the two beings at left).  On the first day, they reached Xeutari Weaka, where the only lagoon existed in those times (green and orange oval design) in the area now known as Mesa de Nayar.  They continued onward to Kiewimutá where they engraved each nierika around a rock face on the mesa.  It was there the darkness was dispelled by the first appearance of the sun (upper right), which Takutsi saw as an omen that a deluge would engulf the earth though the world would emerge again.  They then placed a sacred design of the sun, Taweviékame, Our Creator, in the center of their disk, to which they gave the name Nierika Namma (at center). Since then, the sacred aspect of the sun is always depicted at the center of a nierika. Namma is the name of the sun’s nierika.  From left, counterclockwise, around the sun symbol are seen the nierika of Tamatsi Maxakuaxí, Tamatsi Kauyumari, Tatéi Yurianaka, Takutsi, and at top, Tatewarí, whose position indicates that he is always the leader of the pilgrimage.  Atop the nierika are five urute, arrows that are instruments of their supernatural powers, four of which Takutsi asks her companions to carry to the four corners of the earth, while she places hers with Nierika Namma in Kiewimuta, the center of the world.  It was here that she grew her first crop of maize.

As these preparations took place, another being, Watákame (far right with a cutting tool (machete) in his hand), was attempting to clear his field for planting maize.  Yet for several days he had returned to find the brush he had previously cleared standing again uncut, for at night, unknown to him, Takutsi would come and raise the brush with her staff. When he discovered her (to his right), he demanded an explanation.  She told him his labors were unnecessary for a disaster was coming and instead he should cut down a wild fig tree (far left) and make a canoe.  She instructed him to take as his personal companion a black bitch, which embodied Tatei Yurianaka (Our Mother Earth).  Two birds, the one (top left) from Xapaviyemetá (the seat of Our Mother of South Waters) and the other from Haramara (the ocean), announce to Takutsi, their words flowing from their beaks, that the sea is rising and the flood approaches.  Above the bird at left are streaks of lightning.

Watákame was a common hewixitari and his wisdom was incomplete, as symbolized in his two depictions bearing three and two dots respectively (for five is a number of completion), but his earnest interest in the conversations of the five ancestors won him the privilege of becoming their companion.  The five ancestors boarded the canoe along with Watákame. They rose over the waters of the flood and traveled four years to the corners of the earth trying to find Nierika Namma again. In the fifth year, guided by the bird from Xapaviyemetá, they found dry land and they were able to descend and continue their search.

Explanation and translation by Juan Negrín based on a tape recorded conversation with the artist. Copyright ©Juan Negrín, All rights reserved digital and print.