The Birth of the Sun 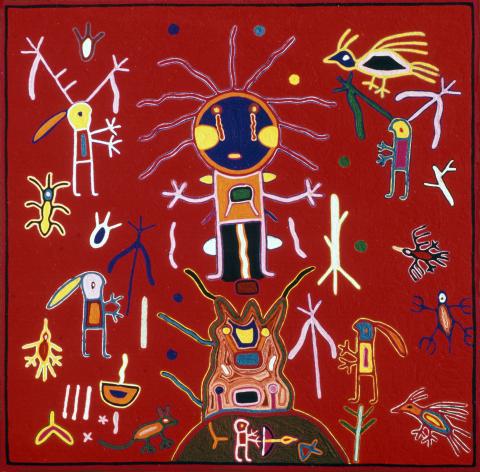 In the first times there was no light. Our Ancestors, the Deer-people (Maxateutewiyari) managed to discover Fire, Our Grandfather (Tatewarí) and soon the light of Our Great-Grandmother Moon (Tacutsi Metseri) appeared. But they were not satisfied with these sources of light. In order to achieve their purpose, the wise Deer-people sacrificed several children, by drowning them in water, but they were not able to induce the cosmic transformation. Instead of light, four birds appeared.

Here we are the four Deer-people, who eventually noticed a poor little boy (at bottom center), whose face was covered with pimples. This ugly boy played constantly with his bow, shooting at a target which he threw into the air and at a pine tree. They noticed that he never failed a shot, and dreamed that he would become the Sun, Our Father (Tayau). When they proposed to him that he sacrifice himself the boy at first refused and they had to hit him with a stick (light blue line beside deer person at lower left) so he agreed to accompany them to the river (blue line over the olive green field where he played). Finally, the child accepted his fate and threw himself into the water to drown.

For five days, he traveled in the Underworld (Watetüapa), until he began rising from Burnt Peak (Xeunaru), above the holy eastern land ‘where of Our Ancestors paint their designs on the face of the pilgrims’ (Wírikuta). During the first three stages of his ascension, which are symbolized in the brown area, the initial rays of dawn were reflected from within the Peak. Then he began his path in the sky; but when he reached the fifth stage, his motion was detained. No matter how much he tried he could not elevate himself above this level, which was too close to the earth. He cried because of the pain his sacrifice was causing him and all those who were exposed to his terrible heat on the earth. His purulent pimples are being carried off his body in the wind (wavy white lines) to the earth. Our Father is the origin of skin illnesses like measles and smallpox.

Then he summoned the earthly creatures to pronounce his sacred name. Frantically, they tried to do guess it: First of all, the ancestor who became the rat (bottom left). The next one to try immediately also failed and became a mikürí, type of owl (bottom right), but his effort allowed him to be the Sun’s evening companion. The hummingbird (lower left) was not successful either, but became the Sun’s companion by day. The ant (left of center) was a fourth creature who tried, and his efforts were such that he has retained many human traits in his ways. Finally, the turkey (top right) ascertained the proper name of the Sun: “Tau, tau, tau”, he cried. This deserved him his collar and his intimate relationship to the rising Sun.

Thereafter, the Deer-people sacrificed a turtle; then they gathered its blood in an offering bowl (over the rat’s tail) and they sprinkled it with their feathered arrows to the Sun. After giving him this substance, one of the wise ones was able to raise the Sun on his antlers, also feathered-arrows, to the proper level in the heavens. Our Father Sun felt grateful and reconstructed the shell of the turtle from its broken fragments, which is why it looks patched.

The toys of the Sun as a child (bottom left) remain where he lived near the fire (below the hummingbird and behind the rat, its smoke rises from a bowl). Near the left hand of the rising Sun is a white oak that he used as a staff on his trail.

Translation and Interpretation by Juan Negrín based on a tape recorded conversation with the artist. Text and photograph ©Juan Negrín 1973 - 2018