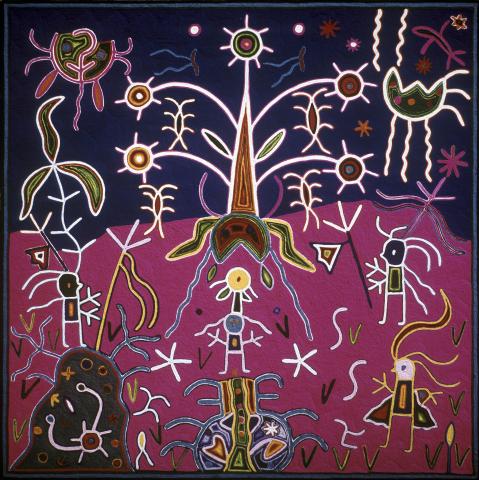 Known as the kieri or tree of wind in Wixárika (Huichol), he was once a very mischievous boy (lower center). Sometimes he would strike others with sticks or throw stones at them, until finally he was chased from his home on earth (rounded area at bottom center), leaving his clay toys scattered behind (odd-shaped figures).

He ran away to the top of a hill, but he soon came across Our Mother of the Earth and the Rivers, Tatéi Utüanaka (at lower right). With the power of her spirit (on her head) she stole him, pushing him up a path where he left the imprint of his foot steps (five bright spots leading up to the child's chest). Then she thrust him into the water-hole (symbolized by the yellow disk above) called Tatéi Matinieri, Our Mother who is born in the east, to whom all Our Ancestors belong. The child's tears during this ordeal are depicted as two blue dots on either side of this emblematic crown above his hair. The spot at the center of the water-hole symbolizes his resurrection.

He emerges, reborn and transformed into a kieri, a solanaceous psychotropic plant fastened to the top of a kawi, sacred red peak. It has five eye-like blossoms at the tip of its branches representing the fruits of wisdom that it spreads to shamans in the four cardinal points and in the upper center at midnight. There are nierikate, holes in the rock near the kieri that lend him special insight and allow him to follow the steps of his devotees. They are represented as two large hemispherical figures on the top left and right.

The first shamans who approached the kieri were awed by its power when they saw it release its pollen (two wavy pink forms outlined in blue at top) and four bees that were attracted to it were diverted from their course between its branches. The shaman on the right used his muvieri, plumed arrow, to understand and communicate with the kieri to learn how to heal and how to chant.

The shaman on the other side climbed to the top of the peak, depicted as a grey mound to learn more from direct contact with the kieri. He cuts off three leaves that rise above his head, symbolizing his ascending wisdom. During the course of six years, he returns to the peak to deposit offerings to the blue pink circled water-hole that is nearby. The wavy blue lines symbolize the winds blowing on the edge of the peak.

The shaman recognizes that the kieri transforms also into Tamatsi Wawatsari, Our Elder Brother Large Antlered Deer. The antlers of the deer are depicted as two pink horns striding the central red crag and its green ears; its eyes are depicted in the crag as maroon spots and on the trunk above as leaves. Flowers represent prayers for life and abundance in white, pink and yellow colors. Most of the sinuous lines represent emanations of the power of the wind, while the dual straight lines are grass blades and the dots are blood or chocolate offerings.

Interpretation by Juan Negrín based on a taped
explanation with the artist.
©Juan Negrín 1973 - 2018 All rights reserved