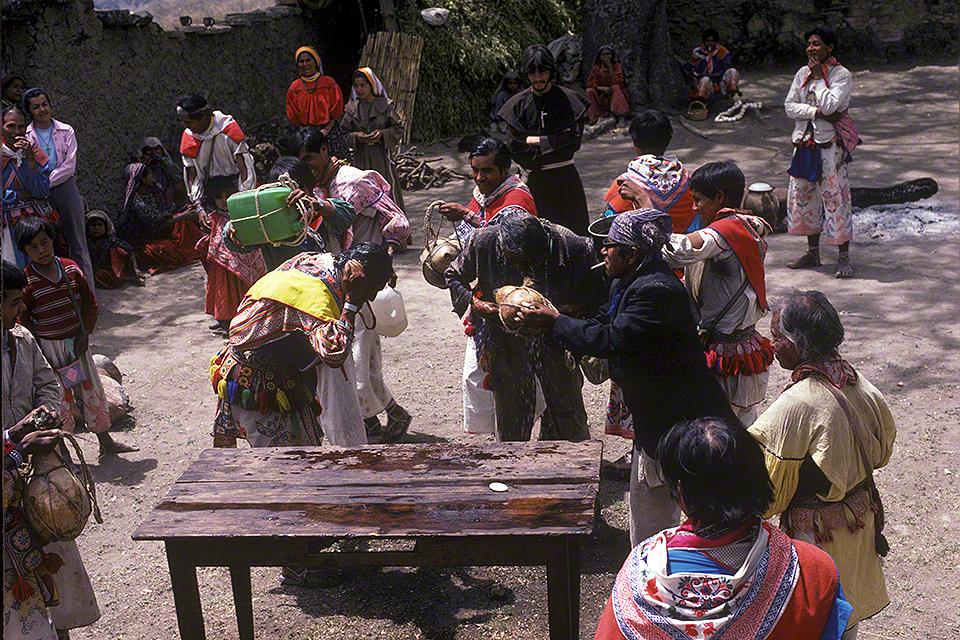 The Wixaritari Cleansing Themselves during Easter - Photograph ©Juan Negrín 1979 - 2018

The Huichol were distinguished as xurute, according to a geographical map published in 1579, in the Atlas Theatrum Orbis Terrarum (reproduced in various sources: Rojas, Neurath). The term vizurita is used by Father Tello, in his Crónica Miscelánea, written in 1652. The first reference to the huicholes as guisoles appears in a briefing to the bishop Ruiz Colmenares (between 1640 and 1650). Father Antonio Arias y Saavedra used the terms xamucas and huitzolmes in his chronicle (1673), the first ethnological work on the Indians of this area of the Sierra Madre, according to historian Gutiérrez Contreras.

After the Huichol lost the coastal lands to the west of their mountain ranges in 1530, they participated in the Mixtón rebellion with neighboring natives. In 1550 the conquerors had found silver ore in the west, Tepeque, and to the northwest of the Huichol territory, in Zacatecas. At that point the indigenous insurrection became massive and the Spaniards were not able to ward off the ‘Chichimec war’ until 1592.

Beginning in the late 1580’s, according to Beatriz Rojas1 the first Tlaxcaltecan Indian colonies were established as a spearhead for the colonial penetration of the region. They accompanied the conquerors on their expeditions to subjugate other Indians and were granted a privileged status. The Spaniards built presidios and towns, protecting the route from the mines to Mexico City along the western Sierra Madre cordillera, which was appropriately classified as a region of refuge for the Indians by Gonzalo Aguirre Beltrán. 2

To the west, the Franciscans founded a mission in Huaynamota, in 1580, but the Indians fled to the mountain recesses rather than settle near the mission. After peace was formally established on the periphery of the Huichol territory, the Franciscan missionaries founded a mission in 1591-1592, to the east of the Bolaños canyon in the town of Chimaltitán, later Guazamotla, in 1606; Huajimic, in 1610; Mezquitic, in 1616; Chimaltitlán and Amatlán de Xora, in 1620; Camotlán, in 1624 and Huejuquilla in 1649. 3 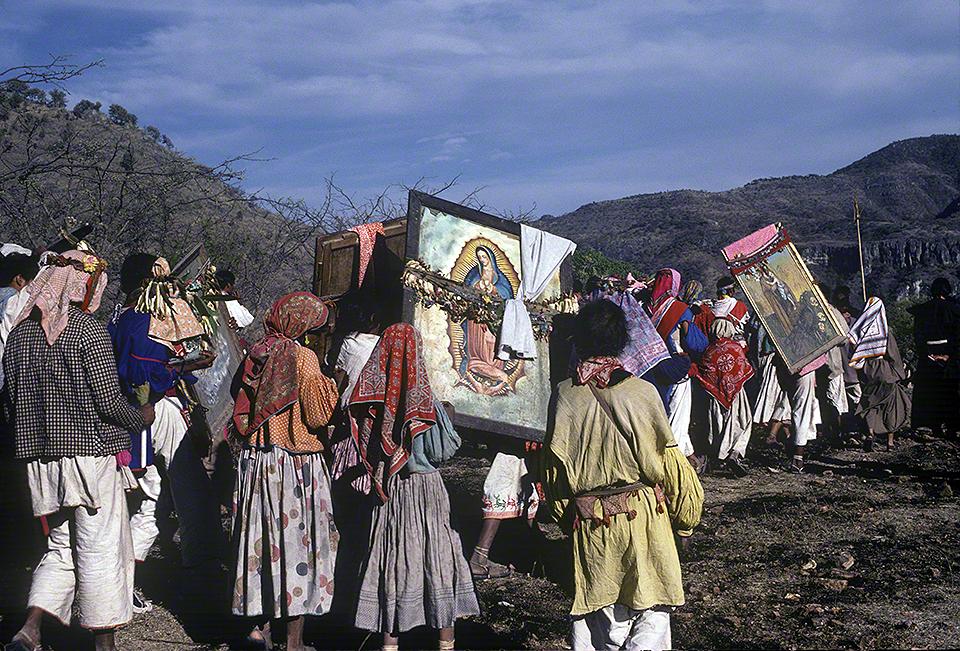 The last great Huichol rebellion occurred in 1702, but by 1705 they were nominally pacified in the core mountain communities of San Andrés, Santa Catarina and San Sebastián. Their Cora neighbors, who had remained impregnable in their fiefdom called La Mesa del Nayar today, were finally defeated by the Spaniards in 1722 with the help of some Huichol from the peripheral regions of Huejuquilla, Tenzompa and Guazamotla,4 backed by inside information gathered from one of the Huichol leaders of San Andrés Cuameata.5

As the Jesuit father Ortega mentioned, the Coras rendered cult to the mummy of their deceased leader Nayarit, the Son of God who is in the sky and in the sun. The mummy was taken by the conquerors and burned publicly in Mexico City with the most prized remains from the temple of the sun.6 According to the research of Mexico’s nineteenth century historian Alberto Santoscoy of early missionary data,7 the Huichol rescued one of the four mummies that were kept by the Cora in Mesa del Nayar. Three to five years later, the Spaniards located it in a temple the Huichol had built near the current town of Tenzompa. The dried out body was seated on a shaman’s chair with its bones tied in place by reeds, curiously wrapped in wool garments and adorned with feathers of multiple colors. It was accompanied by stone idols and other relics that the Spaniards burned and destroyed in the area called Muxipa.

Somehow, the Wixaritari have apparently preserved the ancient mummy of Maxakuaxí, which they venerate to this day. They made this affirmation to Diguet at the end of the nineteenth century and have confirmed it to me recently.8 San Sebastián itself became the seat for an inoperable Franciscan mission around 1730. “Its realm of control was always very superficial, and by 1743 a missionary commented that the Indians of the region still conserve their freedom and that the faith had only been spread minimally”.9

The Huichol were not repressed as strongly as their Cora neighbors, who had taken a more openly aggressive stance against the Spaniards until the end and who probably dominated the Huichol around the time of the Hispanic conquest. When the Cora were conquered, they were placed under the supervision of the stricter Jesuit missionaries, who forced them to congregate in towns instead of allowing them to live in their dispersed ranches. After Mexico’s war of independence from Spain in 1811, the Franciscan missionaries withdrew from San Sebastián for 30 years. In 1848, they founded their most important mission, Guadalupe Ocotán, which has become an annex of the community of San Andrés.10