Why are some Native Americans fighting efforts to decriminalize peyote? 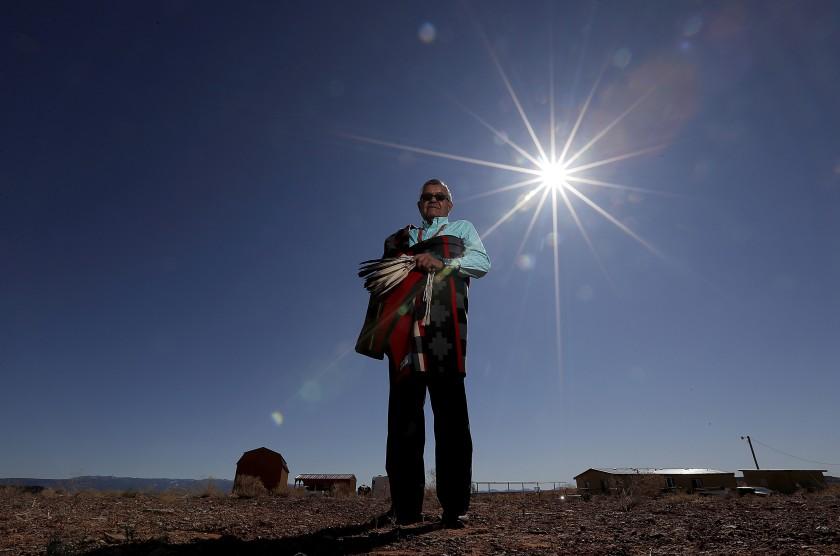 MEXICAN WATER, Ariz. —  For Navajo spiritual leader Steven Benally, saving a Native American religion from extinction means preserving those diminishing lands where hallucinogenic peyote grows wild. “It’s a small but important step toward realizing a prophecy,” said the 61-year-old. Preservation also means battling activists in the California Bay Area and other cities who want to legalize consumption of the psychedelic cactus. “To these outsiders, we say, ‘Leave peyote alone. Please,’” Benally said. “Is that too much to ask?”

Under federal law, only members of the Native American Church are authorized to ingest peyote. That could change, however. Dozens of cities across the nation are considering legislation to decriminalize an array of mind-bending plants and fungi that have come to be known as “The Big 5” — magic mushrooms, iboga, ayahuasca, huachuma and peyote. The movement is led by the nonprofit Decriminalize Nature, whose mission statement envisions happier and healthier people as a result of legalization. Decriminalize Nature’s mission statement suggests that peyote and other natural hallucinogens should be accessible to everyone, not just Native Americans, because they are capable of inducing inspirational and enlightening experiences.

But some Native Americans are deeply offended by the inclusion of peyote in the surprisingly popular decriminalization movement and worry about the impact it could have on diminishing populations of the ground-hugging cactus. Now, in a racially tinged clash that has come to be known as “the peyote crisis,” leaders of decriminalization efforts are learning a hard lesson in the complexity and volatility of Native American law and policy — both of which can change as quickly as the weather here in the back country of the Navajo Nation.

As the morning sun crested copper-hued mesas in the Four Corners region of Arizona, Colorado, Utah and New Mexico recently, Benally said he was saddened to see peyote swept up in a national psychedelic trend. Benally helps lead a nonprofit created, in part, to manage a newly purchased 605-acre ranch laden with the spineless, blue-green succulent that pops out of the ground like biscuits in the Rio Grande Valley and northern Mexico, the only place on Earth it grows wild. Access to peyote should remain restricted to the estimated 400,000 members of the Native American Church, he says.

“Peyote is sacred medicine crucial to our religious identity and the survival of our community,” he said. “The spiritual healing power it offers is only attainable through Native American protocol. It is intended to nourish the soul in troubled times and inspire our children to become responsible men and women.” But not all Native American leaders agree with Benally.

“Maybe decriminalization of peyote for everyone is the best thing,” said William Voelker, a Comanche and director of the nonprofit Sia, a group dedicated to preserving the traditional spiritual importance of eagle feathers in Native American culture and traditions. “It wouldn’t be very humble of us to claim exclusive ownership to peyote and prevent others from using it. It wasn’t just given to us.”

In addition to inducing feelings that are hard to distinguish from the sensations that mystics have interpreted as divine dialogue, some scientific research suggests that the psychedelics may prove useful in treating mental health issues such as depression, PTSD, anxiety and addiction. The therapeutic benefits of peyote and other natural mind-bending plants should be available to everyone, they say. But this argument has been less than persuasive for those Native Americans who view peyote as a divine gift — a sacrament consumed to focus worshippers’ prayers to the Creator. Their legal right to have access to it and use it is the result of costly court battles and painful cultural struggles with the United States government, they say.

“This is a very complicated issue,” said Miriam Volat, a soil scientist and co-director of the RiverStyx Foundation, a philanthropic group that has helped fund the preservation of land in Texas and Mexico, where peyote is threatened by poaching, mining, the petroleum industry, urban encroachment and cattle ranches operated by unsympathetic landowners. “Trying to tear Native Americans away from a plant that is intricately entwined with their culture and spiritual beliefs is simplistic and short-sighted,” she said. “Instead of saying, ‘You owe us this plant,’ the decriminalization movement should be saying, ‘We’d like to help you take care of your sacred medicine.’”

The controversy emerged in June, after the Oakland City Council unanimously approved a resolution to make the use, possession and cultivation of plants and fungi that contain naturally occurring psychoactive compounds a very low priority for law enforcement. The city action was taken without input from leaders of the National Council of Native American Churches and the Indigenous Peyote Conservation Initiative. They responded with a formal statement that was both pleading and stern. It asked that their groups not be referenced as supporters of the movement without their formal permission. It also said, “We believe that the respectful course is to NOT include the word ‘peyote’ in local resolutions or initiatives to put before governing bodies.” After all, these Native Americans pointed out, there are other natural sources of mescaline such as San Pedro cactus that do not carry the same ecological and cultural implications.

In an interview, Carlos Plazola, a real estate developer and co-founder of Decriminalize Nature Oakland, which wrote that city’s ordinance and successfully lobbied for its passage, said his group agreed to remove the word “peyote” from its website and is now actively encouraging cities to take it out of proposed legislation. But removing flamboyant imagery of the cactus from his group’s website and promotional materials is, at least for now, out of the question. “The process for removing the images from our website, for example,” he said, “would require a conversation between our board and members of the Native American Church. That hasn’t happened.”

Peyote, Lophophora williamsii, will be a polarizing topic if experts from around the world, including Native American spiritual leaders, still gather in San Francisco’s Mission District in April at a Psychedelic Liberty Summit to discuss the legal, cultural and political issues surrounding the emerging psychedelic renaissance. Some supporters of psychedelic elixirs, for example, have a fondness for quoting tribal shamans yet show little interest in living by their teachings. Native American Church leaders insist that access to peyote is their exclusive right, but critics suggest their admonitions sound sanctimonious and out of touch with modern culture.

Dawn Davis, 43, an expert in peyote conservation and a member of the Shoshone-Bannock tribes of Fort Hall, Idaho, worries that decriminalization efforts will renew the kind of fascination with psychedelic experiences that moved a generation of seekers to buy peyote from black market sources in the 1960s. To hear Davis tell it, the power of peyote for Native Americans is embedded in their ancient relationship to the soil and the rhythms of life peculiar to peyote’s natural habitat. “To us, peyote is an ancestor and a living relative,” she said. “Cultivation of peyote outside of the ancient terrain it shares with indigenous people is a step toward hybridization and commercialization.”

The peyote controversy threatens to impact the commercial operations of a handful of people in the United States — all of them Texans — who are permitted to harvest peyote buttons and sell them to Native Americans. To get permission, an applicant must submit notarized letters of referral from local police to the federal Drug Enforcement Administration. The federal permit costs about $1,400 and is renewable annually. Before that, applicants must have a place to harvest peyote, which is getting harder and harder to find. Harvesters, known locally as peyoteros, collect the plants in hot and dry desert hills spiked with thorn bush and mesquite. They have a lock on an industry unique to Webb and Starr counties in Texas.

Today, Native Americans must give prayers of thanks first to clumps of peyote deliberately planted by peyoteros near where they sell their cut and dried peyote buttons for about 35 cents each.
This year, the coronavirus pandemic forced Navajo spiritual leaders to cancel their April pilgrimage to peyote habitat in Texas and to advise older adults not to participate in rituals that use it. The quarantine is not the first time this spiritual tradition has been thwarted, however. In the early 1960s — a time bitterly remembered in this remote Navajo Nation ranching community — law enforcement officers rode in on horseback across roadless prairie at night to break up peyote rituals led by Native Americans. To the subsistence farmers and sheep ranchers of the Four Corners region, it was an assault on their culture and the very survival of their community.

Follow link on right side of page to go to original article to view photos.