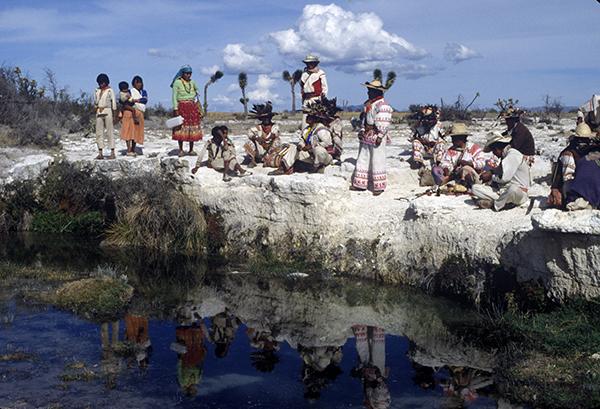 Wirikuta is one of the most important natural sacred sites of the Wixárika (Huichol) indigenous people and the world. The Wixárika people live in the states of Jalisco, Nayarit and Durango and are recognized for having preserved their spiritual identity. They have continued to practice their cultural and religious traditions for thousands of years. Wirikuta is the birthplace of the sun and the territory where the different Wixárika communities make their pilgrimage, recreating the route taken by their spiritual ancestors to sustain the essence of life on this planet. In this desert springs the peyote or jicuri, the cactus that the Wixárika ritually ingest to receive the “gift of seeing”.

The sacred territory of Wirikuta is located in the state of San Luis Potosi and covers the Sierra de Catorce and its lowlands. It was declared a Cultural and Ecological Reserve which covers an area of more than 140,000 hectares in the municipalities of Catorce, Charcas, Matehuala, Villa de Guadalupe, Villa de La Paz and Villa de Ramos.

The Reserve of Wirikuta is an indivisible and continuous sacred territory. Everything there is sacred: every plant, every animal, every spring, and every hill within the 140,000 hectares that make up the Reserve.

The Cerro Quemado IS NOT Wirikuta. The Cerro Quemado (Reunax+) is the peak where the sun rose for the first time and is a very important shrine within the territory of Wirikuta which, as noted, covers more than 140,000 hectares.

In 1988, Wirikuta was incorporated by UNESCO into the World Network of Natural Sacred Sites.

Wirikuta is a unique ecosystem within the world and forms a part of the greater Chihuahuan Desert where investigators have found the greatest biodiversity and concentration of cacti per square meter on the planet. It is much more than a desert: it is a garden. Most of the cacti of Wirikuta are contained in the Mexican Official Standard of Threatened and Endangered Plants. A large proportion of its flora and fauna is endemic, meaning that is found only there. Wirikuta is also a habitat of the Golden Eagle, a symbol of our country that tops the list of the national conservation of priority species. The Golden Eagle is one of 157 bird species that nest in this area.

The Reserve Regulations stipulate that polluting activities are prohibited within the more than 140,000 hectares of the sacred territory of Wirikuta. Large scale mining, being the most polluting industrial human activity that exists, should be excluded from Wirikuta based on the regulations of the Reserve. This Management Plan, developed jointly with the Wixárika people establishes protection for the water, soil, flora and fauna and traditional land use. It prohibits the “dumping or discharge of contaminants in the soil, subsoil or any kind of channel, vessel or aquifer; disruption, filling, draining or diverting water flows as well as substantially changing the landscape”.  This includes the area known as a Special Use Buffer Zone where the mining is intended to be carried out.

In this sacred territory, which has also won the hearts of thousands of non-Wixárika Mexicans and people around the world, the Mexican government has granted at least 22 mining concessions to the Canadian company First Majestic Silver Corp. in the area of Real de Catorce through the Mexican company Real Bonanza SA de CV. The area of the concessions is 6,326.58 hectares 70% of which are within the Wirikuta Reserve.

In the heart of Wirikuta in the area of El Bernalejo, in the community of Margaritas, the government has granted at least two mining concessions to West Timmins Mining, a Canadian company working through its Mexican subsidiaries Golondrinas and Cascabel. The region of El Bernalejo is the home of the sacred deer, Kauyumarie, and is one of the most important and sacred areas of Wirikuta where the Wixárika deposit their sacred offerings and hunt the peyote. The mine that is planned for this area is to be an open pit gold mine – one of the most destructive methods of mining that exists.

The large amounts of water used by the mining industry would lead to the drying up of watersheds that, according to reports from the National Water Commission, are already over exploited and have little chance of recovery.  In addition, the sacred springs where the Wixárika people gather their blessed waters would be at risk of contamination from cyanide, xanthates and heavy metals.

According to the zoning of the management program these mining concessions are located in an area of the reserve which is designated as a Buffer Zone for Traditional Use, which allows traditional activities of natural resource use that were engaged in prior to the establishment of the Reserve “so long as this does not cause significant changes to the ecosystems”. The permitted activities are those that allow for the satisfaction of basic economic and cultural needs of the inhabitants of the Wirikuta Reserve as well as the cultural needs of the Wixárika people”.

A third threat that is occurring comes from Tomato Agribusiness Companies which have been bulldozing several properties located within the Reserve with the complicity of the authorities of PROFEPA who haven’t closed down these illegal activities in spite of receiving a popular denunciation in March. The bulldozing is being carried out in areas of high environmental value where peyote and other cacti protected by Mexican laws grow, including Ferocactus pilosus, Ferocactus hamatacanthus, Coryphantha poselgeriana, Echinocactus platyacanthus and Leuchtenbergia principis. Moreover, these same companies are responsible for the drought in recent years because they bombard the clouds with chemicals impeding the rain which is so necessary for the farmers who depend on it for their crops. It is a situation that has increased poverty and migration. For the farmers of the ejidos in Wirikuta, 2011 has been the worst drought in 50 years.

WHAT IS MODERN INDUSTRIAL MINING?

Contemporary industrial mining, or mega mining, is the most aggressive human activity for the natural and social environment.

The mining process that is not carried out in underground tunnels but on the surface of the earth is called “open pit mining”. Open pit mining removes the top layer of the soil (inhabited by plants and animals) to make available the extensive deposits of low-grade ore. Modern excavation equipment and explosives now allow removing and crushing whole mountains within hours, leaving huge craters that may occupy over 100 hectares and usually reaching 200 to 800 meters deep.

Whether open pit mining, or mining via tunnels or galleries, two processes are used to separate the metal from the soil. The first one is LEACHING WITH CYANIDE and the second one is FLOTATION WITH XANTHATES. In the cyanide leaching method the extracted soil is accumulated in large piles which are sprayed with a cyanide solution and water. In the flotation method with xanthates all the material collected is floated in large pools filled with water and a solution of xanthates (one of the most toxic chemicals known to man).
WHAT ARE THE CONSEQUENCES OF MEGA MINING?

Rivers, streams and aquifers are depleted: With mega mining, the average mine uses approximately 100 MILLION LITERS OF WATER A DAY taking this water from local springs and aquifers. In other words, the water they use each day is the equivalent of the average consumption of 150,000 households. It takes 2 tons of water to extract a single gram of gold. Think of the consequences of such consumption in a semi-desert such as Wirikuta!

Destruction of the soil: The method of open pit mining destroys the surface layer of the soil where plants can grow and animals and humans can live and leaves in their place huge craters and dead zones.

Contamination of soil and water: A medium-sized mine uses about TEN THOUSAND POUNDS OF TOXIC CHEMICALS EACH DAY to separate the metal. The danger of these chemicals is compounded by the highly poisonous heavy metals (e.g. mercury, lead and arsenic) that when taken from the depths of the earth and exposed to the weather are made unstable and are discharged into the earth and water. These poisonous pollutants are carried great distances by the wind contaminating soil, rivers, streams and aquifers (groundwater).

AGREEMENTS AND LAWS THAT PROTECT WIRIKUTA

The State of San Luis Potosi approved on June 29th of 2010 the LAW OF INDIGENOUS CONSULTATION. Under this law the following subjects will require consultation: THE GRANTING OF CONCESSIONS, CONTRACTS AND OTHER LEGAL INSTRUMENTS AFFECTING THE USE AND ENJOYMENT OF THEIR LAND AND NATURAL RESOURCES.

Articles 6 and 7 of Convention 169 of the International Labor Organization on the Rights of Indigenous and Tribal Peoples (ratified by the Senate and the President of the Mexican Republic) dictate that governments must consult the indigenous peoples concerned each time legislative or administrative measures will affect them directly. The peoples concerned shall have the right to decide their own priorities for the process of development of the lands they occupy or otherwise use to the extent that it affects their lives, beliefs, institutions and spiritual welfare.

On April 28th of 2008, with PRESIDENT FELIPE CALDERON as a witness, the Pact of HAUXA MANAKA FOR THE PRESERVATION AND DEVELOPMENT OF THE WIXÁRIKA CULTURE was signed by the governors of San Luis Potosi, Durango, Jalisco, Nayarit and Zacatecas, and by the president of the Wixárika Union of Ceremonial Centers. The witnesses were the President of the Committee on Indian Affairs of the Honorable Chamber of Senators and the General Director of the National Commission for the Development of Indigenous Peoples. According to this pact, the traditional rulers and governors of states as well as the Federal Government are committed to protecting and enhancing the historical continuity of the sacred sites and pilgrimage routes of the Wixárika people. It also includes agreements to establish rights of way, co-responsible care of natural resources, preservation of plants and animals needed for rituals and the disclosure of Wixárika culture as the heritage of the nation.

The Management Plan for the Reserve of Wirikuta, developed in conjunction with the Wixaritari, establishes protection for the water, soil, flora and fauna of the sacred Wirikuta Reserve as well as restrictions on toxic mining.