Visions of the Blue Deer in Wirikuta 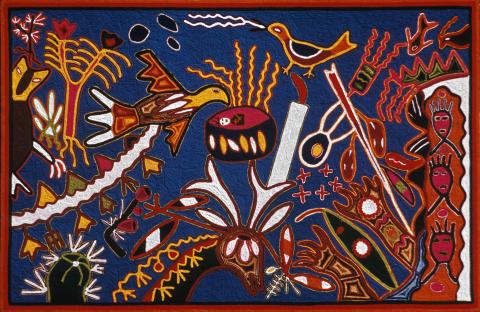 "The Blue Deer and the Eagle, who is the two-headed eagle of the skies, and the Hummingbird reached (the sacred eastern desert called) Wirikuta through great sacrifice. Upon reaching Burnt Peak (at far right), they delivered the arrow, the corn and a bowl as offerings to the gods who live there."  (Translation of the text written on the backside of the yarn painting and signed by the artist.

Blue Deer, Maxayuawi, is Our Elder Brother, Tamatsí, who changed into peyote on his path (at lower left). The sacrificed deer is Kauyumarie, whose blood is necessary for the offering of the cornhusk (at lower right). The Deer has an arrow with a couple of feathers hanging below each antler to communicate in every direction. The Eagle ascends over the bowl to reach its place as Our Mother Eagle Girl, Tatéi Werika Wimari. Upon reaching Burnt Peak, where Our Father Sun would appear for the first time, they delivered the votive arrow, the corn husk and the sacred gourd-bowl as offerings to the ancestors who dwell there in petrified form.

The deer, the eagle and the hummingbird, t+pina, ate peyote and entered into communion with the deities in Wirikuta. The deer cried from exhaustion and joy. He painted sacred designs on himself with the colors of the tsuwiri plant (upper left), The eagle's flight blazoned a trail of joy. The hummingbird sang with all his might; the words of his song are the blue spots.

Then, from Burnt Peak, Reu'unaxi, the most sacred of the mountain peaks, there appeared figures of three innocent children. The pink dots are their secrets. This vision is transmitted through the arm of the peak to the central prayer bowl, xukuri, where it is revealed. Thus, Reu'unaxi spoke to Our Elder Brother: he decreed, as symbolized by the five red crosses, that each Wixárika child was to be carried on the antlers of the deer to Wirikuta five times, and that each child must bring to Wirikuta the first fruits of the harvest of corn to be sanctified as offerings.

Details: The yellow and white elliptical figures on the bowl are grains of corn and squash seeds. The silk on the corn husk is stained with blood between the arms of the mountain. Two red and white Indian carnation flowers (marigolds), puwarite, on the corn and on the hand are life blessings. A turkey and fish appear (at top right) because they gave their blood in immolation for the sacred instruments. The deer carries a lit candle on one of its antlers.

An owl (at upper left) that has always lived in Wirikuta observes the changes in darkness. Other plants depicted in the area are: the izote, a large pink and yellow yucca tree to the rigfht of the owl, and the maguey (with five white leaves between a foot of the owl and the root of the izote). Another plant is called "old man's beard", ukiratsi m+xiyaya, whose white spiked stems are scattered in the wind and stick into the flesh of whoever gets in their way (it is symbolized between the deer and the eagle).

Notes: The interpreter, Juan Negrín, originally understood ri tsuwiri to be the plant from which the yellow pigment is applied on the face of peyote pilgrims (seen abvove the neck of the deer). It may be a flowering plant in the valleys of the Sierra.