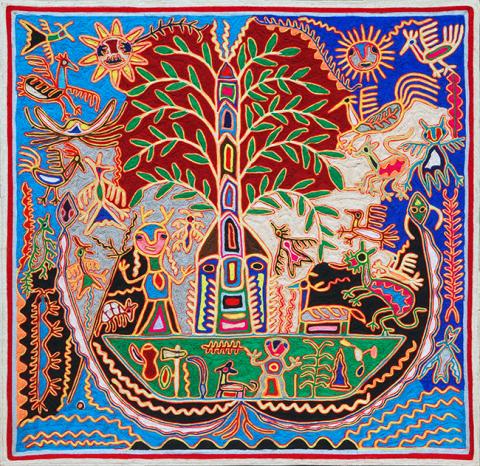 This is a representation of when Takutsi Nakawé, Our Great Grandmother Growth, saved all of our animals with the canoe she made from the native fig tree, xapa (center), which has a face at its center that emerges from the canoe. In the middle, below the canoe, are the roots. The face on the xapa represents the face of Takutsi and it is with the xapa that Takutsi’s mask is made for Wixárika celebrations. Below, in the canoe is Tuamuxawi (also known as Watákame, the first cultivator) who saved all of the grains and seeds from the field, as well as instruments like the machete, the ax, and the ‘epá, a small hook for the small field.

When the xapa bloomed, Takutsi Nakawé (to the left of the tree) called on all of her animals and gathered all of her brood from the countryside to save them from the great flood. In the sky from where the rain comes is Tayeu (the sun) cornered (right) to the right of the star, and below metseri (the moon), represented abstractly as the serpents that hold the canoe. Various types of birds are shown such as the macaw, the magpie, the kwamuwieri (below the sun), sukwe, xu’aú in the hills, maipuri below the xapa branch (above the deer), tipina (hummingbird at top left), kwitapi (chachalaca bird, above squirrel), ‘aru (turkey), ‘istame, kwixí, ‘iyakue (small bird, next to the muxixi, a long stick next to Takutsi) and mikuri (owl, next to right margin). There are also various worms: the kawi or caterpillar (to the left in blue), above the kawi we see the kwitsi (worm represented in red), the muxá to the top right in red that is seen at night, and the red form to its right is muxaka, a “friend” of one hundred legs. Various other important animals also appear such as the tiger (in the canoe to the right) and, at its side the deer that was saved during this time, the haitsi (badger, next to the mikuri), muxá (sheep), the xiye (armadillo, next to Takutsi), the teki (squirrel represented in green on the left), and below to the right there is a kipí (butterfly).

From the sea the serpent raises the canoe. The stick that Tuamuxawi holds is ‘etsamé (the hoe), and at his side is the machete. The orange dot at bottom left is where Takutsi broke the earth with his muxixi that he uses to measure and from where water emerged that Takutsi measures.