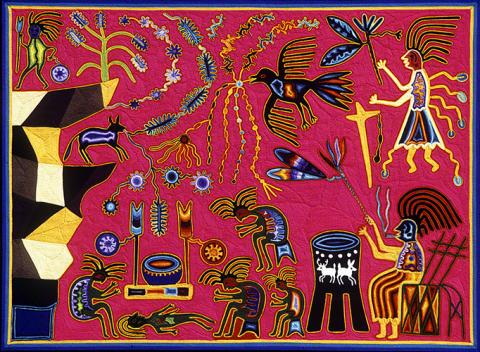 By singing chants which they admired, Takutsi gained the friendship of the cannibalistic Hewixi tribe, who possessed the two mighty plumed-arrows and the gourd bowl which brought rain. They would call on her to instruct them in her secret knowledge by singing her sacred stories at their celebrations. She is seen at the lower right smoking a cigar with a drum (tepo) in front of her and a plumed arrow (muvieri) in her hand. Now they wanted Takutsi to sing during their celebrations of Nama Wita Neixa, which is held before the seeds are planted in June. In honor of the occasion, the Hewixi, who ate people and survived solely on blood, had sacrificed one of their tribe (bottom left margin). Takutsi had to partake of their custom, and for drinking blood she was now one of their family with her new name Nakawé .1

However, before the celebration began, she had passed on the description of the bowl and arrows to deer-person (Tamatsi Kauyumarie), who was told to arrive that midnight with copies and exchange them for the instruments of the Hewixi. They undertook this plan with the assistance of spirits who communicate at night (Itaikarixi): the black crow (kuatsa), the fox (kauxay), and the owl (muikuri) which is not depicted. These creatures placed a spell on the Hewixi, and by midnight they had fallen asleep (as seen at lower left). The dots emanating from the crow are sleeping spells (peha).

Tamatsi Kauyumarie had waited on a sharp peak (top left corner) in the area over a place where the Hewixi lived called Kurupú Nakatá, meaning ‘inside” (nakatá) “the snail” (kurupú) because of the deep cave which was beneath the peak. Before he descended, he spread the ground with thorny stickers of the tauxirra plant (Mex. Guizapol, green plant with blue burrs, top left). Then reaching the area where the Hewixi slept, he replaced the bowl and arrows and escaped back up the cliff. The Hewixi awoke and, discovering their loss, set out in pursuit of Tamatsi Kauyumarie. Each time they would near him he would change into another form, animal, plant or mineral. The fox and crow threw in their path more tauxirra stickers, the horn-shaped needles of the upá and the spines of the ruxi (two varieties of acacia). 2

Unable to track down Tamatsi Kauyumarie, they returned to capture Takutsi Nakawé instead. But, as soon as she saw the instruments had been stolen, she stopped her drumming and fled in the opposite direction taking her plumed-arrows (muvierixi) and-her staff (upper right). When the Hewixi finally approached, she ejected hot ashes from her body and a substance from her staff that released sparks when it hit the ground. Though the Hewixi were scared, they kept returning to harass her. She finally escaped by bewitching them into killing each other and suffering deadly accidents.

With the help of the instruments captured by Tamatsi Kauyumarie, the temple (tuki) was built and the gourd that calls for the rain was placed within it. The two arrows, one blue for invoking female spirits and one red for invoking male spirits, now enable the peyote hunters to make the pilgrimage to Wírikuta, to hunt the peyote-deer and to celebrate the peyote ceremony (Hikuri Neixa) afterwards. Thus, the Tatutuma were able to reach Wírikuta as do their descendants, the Huichol (Wixaritari).

[1] A nakawé is any dangerous beast who devours people.

[2] The three species of thorny plants that were thrown at the Hewixi to aid the escape of Tamatsi Kauyumarie are to this day spread around the house of dead person to prevent it from returning to harm the family.

Explanation and translation based on a tape recorded conversation with the artist.
©Juan Negrín 1973 2018 – All rights reserved digital and print.
Photograph ©Lloyd Patrick Baker 1974