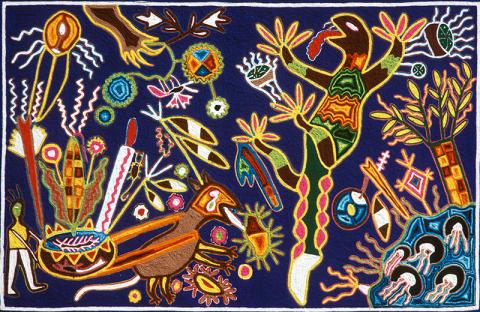 This is the tenth of a series of fourteen paintings that depict the journey of the Blue Deer from the ocean, passing through the dark world, to arrive at last to the sacred land in the east. This occurred at the beginning of time. Here we see how rat person, naika tewiyari, became exhausted and was unable to carry the gourd (adorned with a votive arrow, a tobacco gourd, an ear of corn, a candle and a plumed wand) of Our Grandfather Fire further. This had ocurred to other ancestors who had submitted themselves to the arduous journey, like rabbit and coyote. The rat broke his fast by eating a prickly pear and was transformed into his animal form forever. He is left behind while the other pilgrims struggled on. But the pilgrims were barred from advancing further by a giant, multicolored and venemous lizard named imukui or kieraka, who guards the entrance to the sacred land. This animal, similar to a Gila monster (Heloderma horridum ), protects the sacred land of Wirikuta, where the peyote grows, against all who lack proper devotion (the animal has three peyotes extending from its body).

Our Elder Brother Blue Deer, Tamatsi Maxayuawi, saw all this, and again he meditated in search of enlightenment. His hand (top left) reaches down with a flowering vine to bless the lives of the pilgrims. The insect of death, yuwikame, symbolizing the plight of the pilgrims, straddles the vine. The five sacred waterholes of Our Mother of Water Born in the East, Tatei Matinieri, are represented behind the lizard (as black circles with white centers). This is where Our Mothers of Water dwell and where the pilgrims are purified before entering Wirikuta. Above the oasis is a votive arrow, urú, decorated with a feather, a round nierika disk and snake rattlers; next to that is a rhomboidal god’s eye offering, tsikuri, a willow and wind is represented as wavy lines.