The Dead Gather Under a Mushroom 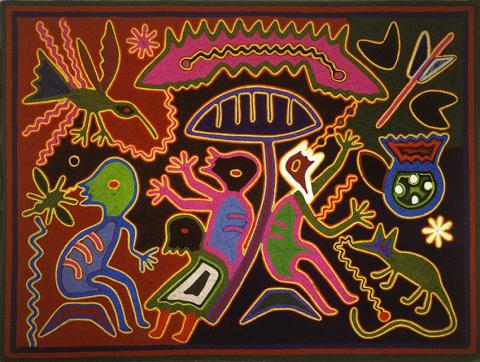 The mushroom (at center) represents the soul of the dead that, like shadows, in invisible form, return to visit the places they once enjoyed as living beings and where they left their hearts imprinted, of their memory (at top right two hearts are rendered). The mushroom, under whose shadow they gather to rest, is an ‘itáikari, or a fright; knowing that to eat it causes death, but, nonetheless, sometimes we eat anything in life.

The dead person (to the right) feels his tired soul. Sitting next to the mushroom, he thinks and directs his words (knotted thread that emerges from his mouth) toward the sky, Taheimá (pink form in the upper part of the painting). He thinks: “when will I finish my journey in this world? I am tired of revisiting so many places where I have walked. Before, it was easy to collect fruit because I knew the things that could be eaten and for that reason I cut them, but I never thought I’d be punished for this upon my death. What hurts me the most is that we never return to the joyful place, where things are eaten with happiness”.

The soul of the dead visits the places where he walked in life, where he laughed, where he harvested wild tuber and enjoyed the flavor of the roots and fruits. In life, the person killed badgers hitting them with sticks and rocks, they also agitated the water and spilled it when it was full. Now he must return to the place where the badger’s blood was shed (below at right, with blood coming out of its mouth), and he must clean the marks. Where he spilled water from its jug, he must erase the trace (the flower below the jug), because there his heart is in the wind, there his face was marked. We need to go about cleansing our face where we neglected life; if we cut a fruit, we need not throw it away before finishing it, just because we feel satisfied.

Some Wixaritari do not have much to travel after dying because they did not leave their homelands to wander in far off places. They immediately become birds (upper left); so they arrive to the sky “with everything and feathers, with a complete body”.

Nonetheless, the rest follow the heavy traces of their previous actions and “fall apart” tired of wandering in shadow form. On the left side, two dead lean against the mushroom; one wants the other to carry him on his back because he no longer can walk, but his friend is also tired and cannot carry him. Another dead person, seated in front, is begging, looks at the path (which sets out like a thread from the insect’s head) and thinks that there is still a long road to travel. Before being able to grab the thread in the sky, where the soul’s salvation depends, they must also find the arrows (upper right) they lost when they shot them with their bows.