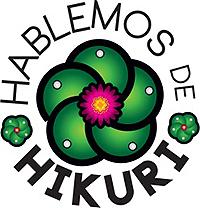 A Peyote Conservation Project by the Wixárika

“Let’s Talk About Hikuri” (‘Hablemos de Hikuri’) is a project that was designed to create spaces for dialogue about hikuri (Lophophora williamsii), or peyote, in order to provide debates and reflections on the use and consumption of this cactus and consider proposals for its protection and use.

The project was developed initially due to concerns raised by Lisbeth Bonilla, a Wixárika (Huichol) woman from the community of Tateikie, San Andrés Cohamiata, Mezquitic, Jalisco. After making peyote pilgrimages in 2015 and 2017, she noticed an apparent decrease in the populations of hikuri in Wirikuta, the sacred peyote desert, as perceived through a greater time investment needed to gather peyote on the second pilgrimage compared to the first.

Her perception was reinforced by talking with relatives who had participated in pilgrimages in years past (and some of whom still remembered carrying out the journey on foot), and who have noticed an increase in the distance traveled while hunting for peyote in more recent years when compared with decades ago.

She called on Natanahel Salvador, a young Wixárika from the same community, who is a graduate student in Environmental Science and Technology at UAQ (Autonomous University of Querétaro) to invite other young Wixáritaari and mestizos (non-Indigenous Mexicans) interested in the protection and management of the cactus to address this issue in a new project focused on raising awareness about the problems of hikuri’s overuse.

Why is it important to talk about hikuri?

For the Wixárika people, hikuri is their most sacred plant. They call it a five-colored ‘flower’ (tutu), in reference to the five color varieties of corn. Hikuri is a fundamental pillar of their culture, as expressed by an elder from the community of San Andrés Cohamiata: “Hikuri is the great teacher who guides us. Through hikuri we know ourselves, we connect with nature and the gods. Hikuri manifests itself in the voice of the kauyumarie [deer] who tell us what to do, whom to remember and to worship. It unites us with our past, our family and our spouse. From it we learn art, songs, ceremonies, and the offerings that we must make. It has always been there to guide us, to remind us who we are, who we should always be.”

For Doña Trini, a woman with a long career as a jicarera (pilgrim whom I interviewed in December of 2017), “Hikuri is a master” that teaches and brings wisdom, and which deserves respect in its consumption. “Before, the government treated us like animals. Now, the Wixárika people have been recognized for their culture and their pilgrimages, which bring rain and free us from disease. That is why we must take care of Wirikuta and the hikuri”.

The first time she made the pilgrimage in 1982, she had the honor of gathering 30 peyote buttons. The second time she went on a pilgrimage, she found none. The next night she had a dream that revealed why she did not find peyote. So she asked the hikuri to give her the chance to find at least 4 or 5 buttons, even if they were not for her. The next day she found 20.

Doña Trini conserves hikuri plants from her first pilgrimage, they have even provided some sprouts, as they have for other inhabitants of the community. She has consumed hikuri since she was a child, but no one ever instructed her about the best way to cut it. She noted that her father took more than a month and a half to go to Wirikuta. In those days, many went by foot, others got a ride in a car or traveled by train. The only food they brought was traditional corn tostadas. To transport hikuri they used kiriwa [ traditional basket] so that the fresh peyote was not damaged. Part of the peyote that was collected was dried to lighten the load.

Let’s talk about hikuri: An experience from December 2017

The decision was made to hold a constructive dialogue about hikuri from December 20-25, 2017, with the participation of jicareros, young Wixáritari and traditional authorities of the community. The conversations were held in the community of San Andrés, and in the towns of Cohamiata and La Laguna, belonging to the same community. The meeting dynamic consisted of creating opportunities for a reliable interaction between the community and inhabitants, presenting the socio-historical, legal, and biological context of the hikuri, as well as results from a study on the loss of peyote populations in the south-central Chihuahua desert. The Wixáritari were also encouraged to share their knowledge about hikuri.

A record was made of these activities and the various recommendations, teachings and stories told by the Wixáritari who participated. A proposal was prepared for creating a “non-commercial biocultural management plan” for the protection and reforestation of hikuri that was accepted by the community. The Wixáritari themselves decided that this proposal should be presented at the general assembly of San Andrés Cohamiata on January 13-14, 2017, in which more than five hundred community members participated, in order to receive the support of the community and an official endorsement, signed and sealed by the both governmental and traditional authorities.

In order to carry out this project, the purpose was explained and permission was requested from the community in a general assembly. The authorities permitted the activities to take place in December of 2017, with the commitment to give reports to the authorities or to the communal assembly.

The first recommendation was that we respect indigenous peoples and put Wixárika knowledge in first place, and also that we seek out traditional authorities, jicareros and other recognized specialists to support the work and provide us with truthful information. It was an enriching experience, and we gathered important observations and reflections on hikuri. Several people told us that hikuri was more common in the past at the sacred site of Kauyumarie, whereas today you have to walk over a kilometer to find it. In these conversations, several community members agreed that the pilgrims are now encountering difficulties during the hikuri hunt, taking three or four days to gather what they need to take back for their family and the people who wait for them.

Francisco López commented that, thanks to peyote, it is now widely known that the Wixárika maintain their customs in Wirikuta. But he has noticed that many teiwarixi (non-Indigenous people) also go to Wirikuta and even dress as Wixáritaari. Some do it out of respect, but some do it solely for the experience of consuming hikuri. Generally, during the conversations we had, the majority agree that there is a decrease in the hikuri population. This, in addition to the existing problems such as mining, greenhouses and a growing number of hikuri consumers outside the Wixárika culture.

As mentioned above, the objective of Let’s Talk About Hikuri was to create spaces of dialogue in the community of San Andrés, Cohamiata, to exchange knowledge about hikuri and, working together, put the current situation of the plant on the table to find a real, objective solution. Our only interest is to generate awareness about hikuri. And as recommended, we must first listen to the opinions of the Wixáritaari of Tateikie.

There is serious concern about the future of this plant in a context where there is a great deal of hikuri extraction by neo-indigenous groups, peyoteros, New-Agers and the Wixáritaari themselves. This, in addition to proposals for its legalization for therapeutic and recreational use, puts this sacred plant into a dynamic of supply and demand without respect or concerns for reforestation. Among the most striking reflections we heard in our conversations was by a woman from Tateikie: “What will become of us when we go to Wirikuta and we do not find any tutuu (‘flower’)? Will the gratitude ceremonies be enough, or does something more have to be done to give back a little of what the hikuri has given us?”

Another interesting reflection came from one of the guardians of the sacred sites, Don Epifanio Gonzáles de la Cruz, who mentioned his concerns about legalizing the consumption of peyote: “the ejidatarios (members of communally held agrarian land) would sell peyote to anyone, even the Wixaritari pilgrims themselves”, who would find themselves in dire straits to continue their ceremonies.

In this regard, it was agreed that a non-commercial biocultural management plan should be developed to oversee the protection, reforestation and ceremonial use of hikuri by the Wixárika nation itself, who would thus lead by example. This would be carried out with the help of an interdisciplinary team of specialists and interested parties with the support of indigenous and mestizo communities inhabiting Wirikuta, and above all under the guidance of the council of jicareros. The project should be wholly and permanently appropriated by the Wixarika nation to facilitate its execution by its own members and thus avoid violating legal provisions that protect it, thus promoting the continuity and expansion of these laws, such as: elevating the conservation status of the species from “special protection” to “in danger of extinction”, better patrolling to avoid poaching, and the donation of hikuri that is confiscated or removed by construction projects to restoration and conservation projects or scientific research.

Our idea is to maintain this space of dialogue for reflecting on and raising awareness about hikuri and promoting techniques of sustainable extraction and harvesting of hikuri in Wirikuta, so that buds regenerate and the stem or “button” of the peyote forms again. The non-commercial biocultural management plan also contemplates the recovery of seeds from peyote buttons harvested to provide material for germination, cultivation and management for ritual purposes only. As an interdisciplinary team, we believe in merging the two forms of knowledge. This is how we have been working with the community, combining Wixárika and Teiwari (scientific) knowledge.

In closing, this project addresses a plant that is older than humanity itself, and for this reason it belongs to the nation as a whole. This plant is almost entirely endemic to Mexico, one element of its tremendous biodiversity that is especially representative of the Chihuahuan desert and a vast ancestral biocultural knowledge that, if managed sustainably, could be used by the whole world. The purpose of this non-commercial biocultural management plan for ritual purposes is to provide a set of guidelines so that other hikuri users who seek to enhance their consciousness can do so in a sustainable way without unwittingly endangering this wild species.