Indigenous people shouldn't have to beg for justice 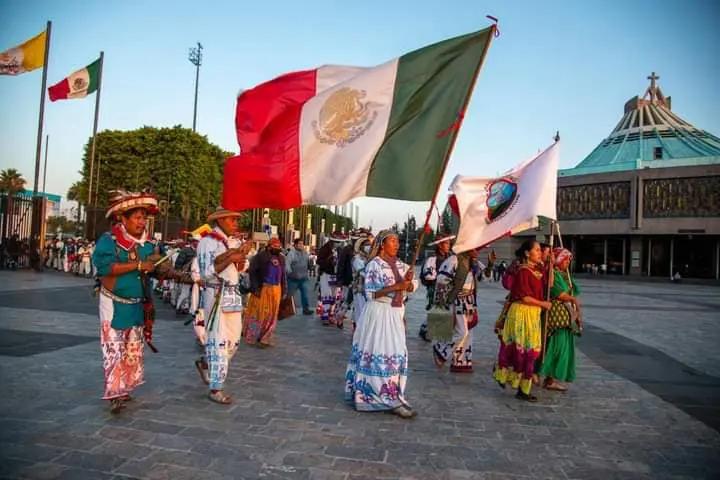 “We are here to reaffirm that we are still standing, resisting, defending what belongs to us.”

UPDATE, May 30: Mexican President Andrés Manuel López Obrador has agreed to meet with Wixarika Caravan after their monthlong march to Mexico City. They are asking him to keep a campaign promise to help resolve the conflict over their stolen lands. This is the back story…

After 32 days of pilgrimage, the Wixárika Caravan arrived at the National Palace. The march began on April 25, 900 kilometers away in the Western Sierra Madre. Since that time, they have been asking for an audience with Mexican President Andrés Manuel López Obrador to request restitution of their stolen lands.

In a moving ceremony upon their arrival in Mexico City on Friday, May 27, at the Basilica for the Virgin of Guadalupe, the 200 pilgrims offered their fatigue, their sweat and their blisters to their deities and to their Mother Earth, Tatei Yurienaka, so that their petition might be heard. They spent the night camping in front of the Basilica and on Saturday, marched to the National Palace. However, they found the doors of the palace closed, and the president has continued to remain silent on the matter.

At the press conference before the ceremony, Sitlali Chino Carrillo, a dignified young woman who serves as president of the Agrarian Coordination Committee, implored the president: “We do not want to wait another 10 or 20 years. That is why I ask you with my heart in my hand to heed this call. And not only for this conflict, but also to attend in an urgent, rapid and pertinent way to the conflicts, invasions and dispossession of the other sister nations that are in the same situation here in Mexico. Yesterday we completed a month of walking, and you don’t know how much this fight has cost us. It has cost us fatigue, it has made us cry, and so on… But we are here to reaffirm that we are still standing, resisting, defending what belongs to us by law and by inheritance.”

Oscar Hernández Hernández, President of Communal Assets for the community of San Sebastian Teponahuaxtlán, the Wixárika community that has been fighting for restitution of more than 10,500 hectares since the land was stolen from them more than a century ago, opened the press conference on Friday, expressing gratitude to all those who had supported the caravan in the states and communities where they passed, from the Western states of Jalisco and Zacatecas to Michoacán and the state of Mexico:

“We are very grateful for all the people we encountered along the way. For the goodwill they showed us, and the opportunity to walk their roads, spend some time in their patio and give us a bottle of water and a taco — we thank them very much.

“In recent years we have not seen a serious desire to resolve the agrarian issue of our community, so we decided to undertake this march with dignity to raise awareness for the entire Mexican nation,” Hernández said. “We feel helpless not being able to see the open door of the National Palace. But we trust and ask the President of Mexico to receive us on Monday (May 30th). We have only one demand: the restitution of our lands.

“If not, we will be asking for more contingents from our Wixárika people. In the community of San Sebastián Teponahuaxtlán we are more than 20,000, and we will be calling on everyone to join us in this fight until the head of our nation can receive us and attend to us and can give clear indications of how our agrarian conflict is going to be resolved” said Hernández Hernández.

The community’s attorney, Carlos González García, gave the background of the case: A presidential resolution on July 15, 1953 recognized the community’s ownership of 240,447 hectares through title from the Spanish crown. San Sebastian is the largest of the Wixárika communities and one of the largest indigenous territories of Mexico. Over the course of the past century, however, the community has suffered significant invasions of its territory by non-indigenous neighbors.

Currently there are two conflicts resulting from these invasions: one of about 10,448 hectares by ranchers from the village of Huajimic, in the municipality of La Yesca, Nayarit; and another of about 800 hectares in Puente de Camotlán, also in La Yesca.

“For decades, these invasions have been protected by rulers, by corrupt officials who have been complicit in this ongoing dispossession of the community of San Sebastián Teponahuaxtlán and Tuxpan de Bolaños and of the Wixarika people,” González said. The community has filed 54 lawsuits for these invasions, of which 17 have been resolved in favor of San Sebastian; the ranchers have so far not won a single case.

In April of 2018, the community tried to take possession of the land that had been acknowledged by the agrarian tribunal in those 14 sentences, following the procedures laid out by the law. It turned out to be impossible. ”Those of us who went to the execution could not do it due to the violent opposition of the ranchers, who had high-powered weapons, AK-47s,, and the truck in which yours truly was traveling was partially destroyed.

“All this happened in the presence of state police officers from the state of Nayarit, 19 police officers and a platoon from the Mexican army. The former did nothing but watch. The second turned and withdrew. That is to say, deliberate omission of the Mexican State to fulfill its fundamental obligations and seek justice for the community.”

In December of that year community representatives met with the Agrarian Cabinet of President Andrés Manuel López Obrador, with the Agrarian Prosecutor, with the Undersecretary of Agrarian Development, and the President’s spokesman.  They agreed that since the  restitutions were being illegally obstructed, the federal and state governments would facilitate a negotiation process.. A working group was established, and the meetings began, one after another.

“And to this day, what we have achieved is the restitution of 41 hectares —that is, a really tiny area. And so the community rightly says that the Mexican State is failing to comply with its constitutional obligations and what had been agreed upon.”

Until the time this article was written, President Andrés Manuel López Obrador has not issued any official statement in this regard. He was asked to receive them today, Monday, May 30, and the community, camped out in front of the National Palace, awaits.

Angélica Almazán Escalante is a Mexican songwriter and journalist, Janzu therapist, translator and co-editor of The Esperanza Project residing in Bacalar, Quintana Roo when she's not on the road.