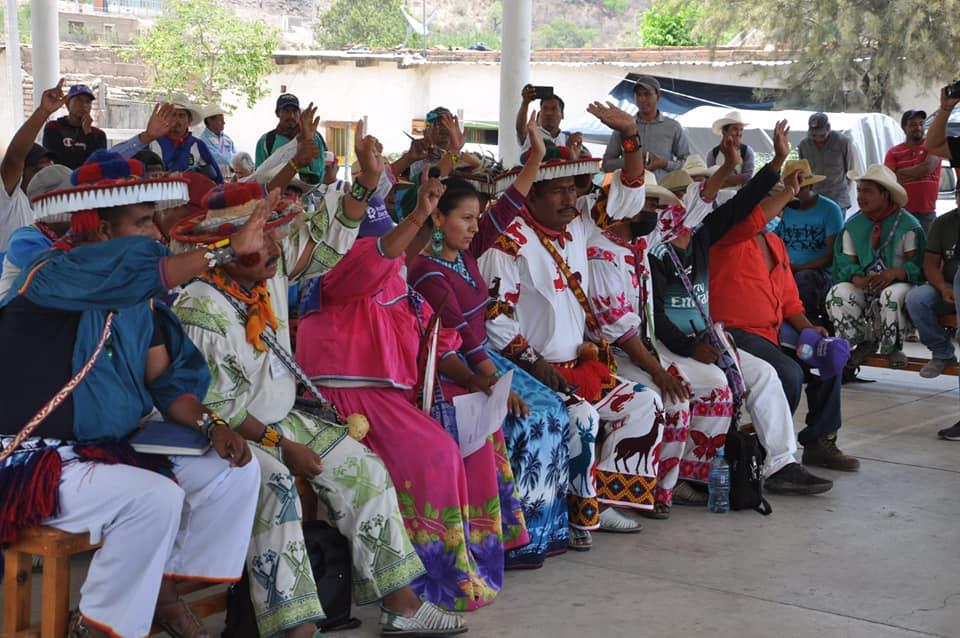 San Sebastian will manage its own public budget without the intervention of political parties.

After four years of struggle, the Wixárika community of San Sebastián Teponahuaxtlán in Mezquitic, Jalisco, will directly receive federal resources to manage amongst themselves without the intervention of local officials or political parties. And they will do so with women at the table under an agreement of gender parity, a rarity among Indigenous governments and, indeed, governments in general.

In a forceful step against corruption and discrimination, San Sebastián took a historic vote on June 11 to directly receive and manage their percentage of the public resources corresponding to the municipality, joining the ranks of a growing number of indigenous communities: the Purépecha community of Pichátaro, Michoacán, and the Otomí community of Pahuatlán, Puebla, among others. San Sebastián is the same community engaged in a century-old struggle to recover 11,000 hectares of stolen lands, having recently completed a 900-kilometer march to the National Palace to demand a meeting with President Andrés Manuel López Obrador.

In an interview for The Esperanza Project, Oscar ‘Ukeme Bautista Muñoz, general coordinator of the Commission for Self-Determination and Autonomy of San Sebastián Teponahuaxtán and Tuxpan de Bolaños, explained the origin and importance of this struggle.

In 2018, San Sebastian made headlines by boycotting the federal elections. And since they didn’t vote, some of the federal funding that they were entitled to never arrived, because government officials said they had lost the right to receive it.

“So there was an internal process of deep reflection and debate about the meaning of the political parties, and the municipal, state, and federal governments, which never solved the problems of our community.”

They analyzed the role of politicians, of those who represent them, the way that those who rise to power in municipal positions take advantage of the resources that arrive on behalf of the citizens, and the money never reaches the community, said ‘Ukeme. Adequate public services do not exist in any of the Indigenous Wixárika communities, while in the county seats they do.

“The resources arrive there, and they do live well, with electricity, drinking water services, garbage collection and other obligations that the City Council has,” he said. “They do have public security, they have patrols, etc. In the community no, nothing like that. And we have always suffered budgetary discrimination.

“The resources never arrive as they should, they only reach a few and the support only arrives for the friends of the politicians in office. Only those who reach municipal positions become rich. The aldermen, even the ones who are Wixárika relatives, almost never defend the interests of the community, only their particular interests and only their political parties. Even when the Wixárika relatives became municipal presidents, they did not do justice to their community either.”

So the community decided to request that the municipalities of Mezquitic and Bolaños deliver the resources directly to the authorities of San Sebastian — the percentage that corresponds to that community, based on their rights to self-determination and autonomy.

“The city councils, of course, refused; they did not answer us, they ignored us, they told us that this did not exist, that in Mexico there are no such rights. So we started a legal process against the municipalities,” recalled ‘Ukeme. “They defended themselves, but we argued for our rights, and in 2019 we won them legally, in court. Then the municipalities were forced to deliver the resources directly to us. It was also ordered in the sentences that a consultation would have to be made where, together with the municipalities and institutions, it was going to be defined how much money they were going to give us, what percentage, and how they were going to give it to us.”

With the arrival of the pandemic in 2020, the consultation was put on hold. In 2021 there were state and federal elections for the Provincial Council, and the Electoral Institute, which is the agency responsible for organizing the consultation, was very busy. U’keme also suspects that there was interference from the local governments, which filed a variety of legal appeals.

“So just this year, 2022, we restarted all the processes and one of those consultations was held this Saturday in San Sebastián, where the traditional, agrarian authorities and commissioners of the 18 localities that make up the community decided unanimously to manage the resources directly.”

And so it was that on June 11, San Sebastian became the first indigenous community in Jalisco to vote to directly receive its portion of federal funding, around 60 million pesos a year — “to create true community development, and not just for a few, as has been happening with political parties,” said ‘Ukeme.

“That is why this is a historic achievement that we participatively decide together what course we want and how we want the resources that belong to us to be implemented, since we are the owners of that money, because we pay taxes, we continue to belong to this country. And it will be a great example for the State of Jalisco and for other indigenous communities.”

As it turns out, communities do have that right in Mexico. Based on the second article of the Mexican constitution, communities can opt to receive and manage their economic resources directly. Municipal officials even told them the Constitution doesn’t say that. But San Sebastian took them to court and won.

“They told us that we don’t know how to manage these resources, that we don’t have the same intellectual capacities, but of course that is a lie,” said ‘Ukeme. “We indigenous people also have those capacities to manage public resources, to administer them, to exercise them as they should really be, that they reach the community, that they are really implemented in goods and services. So, more than a century after these two municipalities were created for the first time, we are going to have that right to decide our course as a community.

“It will be a challenge to manage these resources because we have to be an example for other communities. But of course we can do all of this.”

Another historic aspect of the new initiative is that the Board of Directors that will be responsible for managing municipal resources is made up of 50 percent women, and 50 percent men. The first three years the board will be coordinated by a man, but based on the agreements, in three years he will be replaced by a woman.

“Sadly, indigenous communities still lag far behind on the issue of parity,” said ‘Ukeme. “So I think that this is an important reflection, because sometimes women only occupy secondary positions, they do not have decision-making powers. So it is something historic that the community is doing.”

The initiative promotes diversity in other ways, as well. “This board of directors is made up of young professionals, elders and some who have not had the opportunity to study, so it will also be something interesting that we are uniting, we are integrating.”

“For me it is a source of great pride to belong to this Wixárika community of San Sebastián and Tuxpan, which has been characterized by fighting for their rights, as was manifested in the 30-day march on foot, more than 900 kilometers in search of Justice,” said ‘Ukeme. “And our community is also waging other struggles on other fronts, not just the land issue. Our community is fighting for the exercise of its rights with different community members, different commissions, because it is thanks to the determination of all of them, community members, citizens, young people, children, we are all united to fight for justice in all the aspects.

“The native indigenous peoples of Mexico and the world must not live in oppression, in injustice. We have the right to full development, to decide our course and exercise our rights to self-determination and autonomy.”

Angélica Almazán Escalante is a Mexican songwriter and journalist, Janzu therapist, translator and co-editor of The Esperanza Project residing in Bacalar, Quintana Roo when she's not on the road.