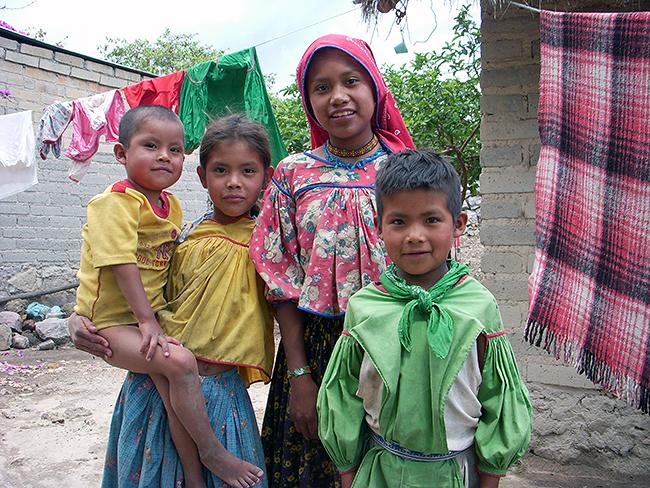 Our Trip to the Sierras

In late June of this year I joined my husband and our daughter Diana and traveled to the sierras for a visit with friends and our now grown Godchildren. Juan has returned to the sierras on a yearly basis and Diana has often accompanied him but this was my first trip in quite a few years. The rains had already begun and made some of our trip difficult although in general we were blessed with fairly clear skies during daylight hours and a couple of dry days prior to our departure which made our trip back to Guadalajara uneventful.

We spent our first night at the weaving workshop, built by our Mexican foundation ADESMO many years earlier. That night, a strong storm passed through the sierras dumping heavy rain and making the trails rather muddy for our walk to the ceremonial center the following day. We were happy to see that the new roof they had put on the workshop the previous year held up well and proved to have no leaks.

All but our first night was spent in a ranch beside the Ceremonial Center where the people were preparing for the ceremony which initiates the planting season. When we arrived the pilgrimage group, or jicarros as they are called, had been gone for several days hunting the deer for the upcoming ceremony of Namawita Neixa. The next two nights brought more heavy rain and the meadows began to turn green. On the third day, the jicarros who had left on the hunt returned with three deer and the women began preparing the tamales that would feed the clan members who had already been arriving in fairly large numbers from their ranches to participate in this yearly ceremony.  Because of this activity it was possible to see many more friends since at another time they would have been a distance away at their family ranches or tending their crops of corn and beans.

It was an honor to be so warmly welcomed by everyone in the community and invited to participate in a major ceremony. We were the only non-Wixárika present although we were told that at a previous ceremony so many tourists had shown up that they exhausted the water supply. Most of the people, and especially the elders, expressed strong disapproval of the presence of so many outsiders and accused a few Huichol of profiting from bringing in tourists. This community has refused to get involved with ethno-tourism unlike their neighbors in the community of Tatei Kie where an entire infrastructure has been set up to accommodate visitors.

Besides reconnecting with old friends I was keen to observe the changes that had taken place since my last visit. The area where the bilingual elementary school and clinic are located seemed to have changed the most. A large water tank had been installed near the school and the medical clinic, and a number of families had built their houses in what was once a meadow surrounded by pine forests. A large number of trees were cut to facilitate this increase in population but the surrounding forest looked very healthy and there were quite a few fairly tall young pines trees growing in the area. There were also two small stores that stock items such as sugar, salt, sodas, fruit juices, onions, oranges, soap, candles and batteries.

The Huichol brought in pipes which now carry water from the tank to the school, clinic and houses so everyone now has immediate access to clean water whereas in earlier days it took walking to the nearest spring and carrying water back to the ranch for their daily needs. I was rather amazed by a second water tank, quite large, that was placed about halfway down the steep narrow path leading to the Ceremonial Center. It brings clean water to the temple area where large numbers of Wixárika gather several times a year and to all the surrounding family ranches. This water tank is fed by a year-round spring at the top of the mountain and now provides clean water in an area that was very much in need of it.

It was very exciting to encounter Micaela Carrillo, a young woman whose family has deep roots in the area and who is the first Wixárika to become a licensed medical doctor. We saw her on our first night when she arrived late after having spent the day visiting patients at distant ranches. She was staying at the weaving workshop with her husband Cirilo who is building a house for their family near the clinic. We’ve known Micaela since she was a very young girl in the sierras and then in Guadalajara when her father put her in a boarding school to study. Her father was a shaman and also the first bilingual teacher in their community. She was always a dedicated student and eventually she decided to study medicine and was accepted to the University of Guadalajara. Between the time she began her medical studies and received her license to practice medicine, she married and gave birth to four children. Her second child and only son is deaf and autistic. Micaela’s strength and perseverance in the face of so many difficulties is admirable. Now, after having worked with Rocío Echevarría at the Casa de Salud Wixárika in Guadalajara, and serving as a doctor for two years in the neighboring community of Wautüa, the government health department has finally assigned her to work in her own community. It goes without saying that her people are very pleased to have her as their doctor and her ability to communicate with patients in their own language is priceless.

A change that is of concern is the loss of native tall grass used in thatching the roofs of the houses and temples. It has become very scarce in recent years because the Wixárika are now forbidden to burn the grasses as they had done for millennia. Because of this, there has been an increase in the number of tin roofs which have many drawbacks. They are very noisy in rain and hail storms and make the houses unbearably hot under the sierra sun and much colder in the winter. They are also quite ugly compared to the traditional grass roofs which complement the surrounding natural environment. Every five years the group chosen to be in charge of making the clan pilgrimages and caring for the ceremonial center’s bowls and arrows, undertakes the task of harvesting the grass which they use to ceremonially thatch the temple and small shrines. The extinction of the grass would therefore also render extinct an important part of their ritual. Clearly it will take some serious investigation to learn how best to prevent the extinction of the grass while at the same time protecting the forests from degradation for the benefit of future generations. Erosion in certain areas was very noticeable, a problem that might be made worse by the loss of native grass. One old man told me they would now have to count on lightening strikes to bring back the grass.

The biggest problem we saw were the hundreds of alkaline batteries discarded everywhere, many half-buried in the earth and rusted and leaking. At the ranch where we stayed we organized the children and gathered all of the discarded batteries in a sturdy plastic shopping bag which was filled to the brim and set it aside for proper disposal. It was unfortunate that we had no way of taking the batteries with us when we departed. In and around the ceremonial center you could find them everywhere you looked. This has been a pervasive problem since the introduction of flash lights, tape recorders and radios nearly 40 years ago, and most of this toxic waste is from the use of conventional flashlights which most Huichol use.

Upon our return I began checking out wind up flashlights that don’t use batteries or light bulbs and we look forward to introducing them, hopefully in large quantities, to the community as soon as possible. In the long run the wind up flashlights will not only greatly reduce the number of discarded batteries but will also save the Wixárika money since batteries are expensive and don’t last long. If you are a user of a windup flashlight and have found one that is better than others we would greatly appreciate your recommendation for the most sturdy and dependable brand that gives the best light. Once we know which wind-up flashlight is most reliable we will write the manufacturer to see if they are willing to donate or at least sell at cost enough flashlights to make this into a meaningful project that can make a big dent in the amount of toxic waste accumulating in the sierras. If we are unable to acquire these flashlights as an outright donation we will send out another newsletter letting people know we are taking donations to cover the expense of buying them.

We are now sold out of the soft and hard cover editions of Artes de Mexico and the publisher is sold out of the soft cover edition. We are looking into purchasing more hard cover copies and will let you know when they become available and for what price. For those of you who live in California’s Bay Area there were a few copies left at the Gathering Tribes Gallery in Berkeley.

Last of all it has been recommended that we change the platform for our website from cold fusion to a content management system such as WordPress or Drupal when we launch a bilingual version of the Wixárika website. This unfortunately means spending double the amount of money we were expecting, and so we will need to acquire additional donations in order to make this dream a reality. In the meantime, we are busy translating pages and essays into Spanish in preparation of the eventual launching of a Spanish version of the website.

As is customary, Juan will write a report about his travels in Mexico during June and July that will cover other worthwhile and interesting news.