Water and Power in Wirikuta 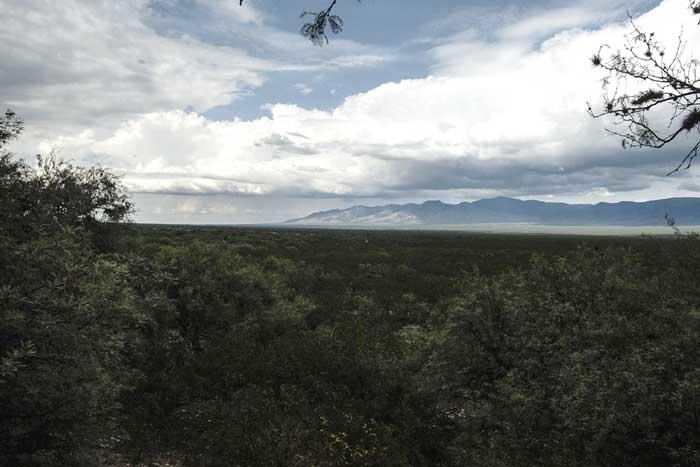 When it rains in the high plateaus of San Luis Potosí, Mexico, the dampened earth releases a scent that showcases its unique biodiversity. During the rainy season, greasewood bushes, mesquites, yucca and a wide variety of cacti flower and give their fruits, while the locals plant their cornfields that grow according to the nourishment they receive from the seasonal rainfall.

The fragrant aroma of the moistened earth is the same as that found in the balms that you can acquire with some locals versed in the varied uses of the flora from this so-called desert, also known as Wirikuta for the Wixarika people. Nonetheless, in recent years the residents of this region have observed a drastic decrease in rainfall and notice that the season feels increasingly shorter. This has direct implications for their capacity to harvest the necessary foodstuffs for their self-sufficiency and for small-scale agricultural production.

Although this area is denominated semi-arid, there are aquifers that come from an important basin in the Sierra of Catorce that provide locals in the lowlands with valuable wells, and Wixarika pilgrims with sacred water holes where they leave offerings since time immemorial. The natural landscapes of the high plateaus are diverse and change with elevation in such a way that the greasewoods and yuccas that reign the lower region are replaced with oaks, pines and fruit trees in the heights of the sierra where water still runs freely after community opposition halted construction of the La Maroma hydroelectric dam.

Between 2010 and 2015 this region became a national and global point of activism for the defense of the cultural rights of the Wixarika people in the face of transnational mining concessions in the Natural Protected Area of Wirikuta. It is in this place where many Wixaritari make pilgrimages in order to leave offerings along the route connecting various sacred places that lead to the peak where their mythological stories tell the sun was born.

This is also the endemic land of the peyote cactus, which they use as a spiritual sacrament and medicinal plant. Although the mineral exploration and exploitation of First Majestic Silver and Revolution Resources was interrupted with court injunctions, mining and other industrial activities have continued to actively operate. This is not only changing the odor of the region, it is also affecting the vital water that is needed for the flora and fauna, and on which the small farmers depend.

The State Urban Development Plan of San Luis Potosí (2012-2021) opened the door for the acceleration of a series of large-scale projects that would drive the global “integration” of San Luis Potosí’s high plateau through the increase in investments from national and international businesses. As a result, during the last five years in particular, agroindustry has increased its footprint, leaving hundreds of hectares deforested and transformed into factories for eggs, chicken, pork, tomato, chili, and cucumber.

The political and economic power of some local and international actors, facilitated by decades of neoliberal policies, have reconfigured land use, leading to a replacement of the dense vegetation into massive rectangles, white greenhouses, and discolored complexes that house millions of caged animals. These dramatic transformations have begun to overpower the special botanical aroma of the high plateaus. Agrochemicals and animal waste now exude a fetid odor, and flies are unbearable in the proximities of the San Juan egg facilities.

As if the political and economic power of transnational companies were not enough, another source of anxiety is the tangled presence of illicit actors and the violence that this brings against those who raise doubts or resist the territorial dispossession and environmental degradation that this development model imposes. This reality can be discerned in the electoral campaign posters that still decorate the walls of the towns of San Luis Potosí.

In the June 2021 elections Ricardo Gallardo, also known as “El Pollo (The Chicken),” won the gubernatorial campaign under the banner of a Green Party and Workers Party coalition (it is worth mentioning that both parties would be hard pressed to demonstrate an ideological and practical commitment to ecological and worker rights). “El Pollo” Gallardo won despite standing investigations of his role in money laundering and heading “operations with resources from illicit origins.” Notwithstanding, it is precisely this strategy that seems to be gaining space not only in the state of San Luis Potosí, but in the agroindustrial tracts that are consuming other states of the republic.

These investments become consolidated in Mexican territory with little attention to the critical conditions of the aquifers and the inevitable pollution that industrial agriculture and livestock bring with the use and disposal of pesticides, fertilizers and waste. In the face of these new chicken, egg and pork farms in and around Wirikuta, it is hard not to perceive the irony in the nickname of the new governor of this state whose family made their fortune precisely in the poultry industry.

Engineer Gerardo Ruiz Smith utilizes data from CATIE (Tropical Center for Research and Study of Agronomy) to conclude that 4,109,630 cubic meters of water must be extracted annually from the aquifer to irrigate 160 hectares of greenhouse tomato. Currently, there are more than 170 hectares of greenhouses within the Natural Protected Area of Wirikuta. This is not counting those that operate outside the Natural Protected Area but whose use of water impacts the entire region’s aquifer.

It is important to underline that this occurs in a region where, according to the most recent studies carried out by Mexico’s water commission, CONAGUA, the Vanegas-Catorce aquifer already has an annual deficit of 4,645,000 cubic meters. As such, CONAGUA advises against the authorization of new concessions because the water being extracted is occurring “at the cost of the non-renewable storage of the aquifer” (sigagis.conagua.gob.mx, December 2020). In the case of the pork industry, 6,000 liters of water and 3.5 kilograms of grain are required to produce just one kilogram of meat (NACLA 2020).

These large-scale projects have been put into place despite state and national decrees that recognize this region as one for the protection of flora and fauna. The contrast between the signs that declare the municipality of Vanegas (one of the various hamlets of the region) as an “oasis of the high plateaus” and the active construction of agro-industrial installations in this same place, make it more than clear that money and political power function without respect for the legal and environmental norms that have been gained with such difficulty.

In addition, residents of the high plateaus have been witness to the technology of rain modification, also known as cloud seeding, which is utilized to minimize damage to the controlled greenhouse cultivations that depend principally on well water. As a result, small farmers are severely affected because they rely on seasonal rain to sustain their cornfields.

As a consequence of these intersecting forms of damage, human rights institutions, small farmers, religious organizations and the Wixarika people gathered on July 1 in the town of Estación Catorce to pronounce themselves against the “use of technologies used by agro-industrial corporations with the goal of preventing it from raining on our lands to protect their production, at the cost of affecting our traditional cultivations.”

Their declaration also recounted the damages that they are already observing with the waste that these agro-industrial corporations create and the continued threat of the construction of a toxic waste facility in the municipality of Villa de Guadalupe. Their declaration calls for an immediate moratorium on these initiatives.

The expansion of these large scale projects reeks of impunity within an exceptionally rich biocultural landscape that is located in a geography recognized for its endemic ecological diversity by entities like the World Wildlife Fund, and for its cultural and sacred value that the Wixarika people have ancestrally attributed to it.

As with mining, the arrival of these businesses offers the attraction of jobs for locals and migrants, yet this occurs under economic models that impoverish worker and environmental rights. Simply put, it is not sustainable to perpetuate a development model rooted in the use of power of a few who profit from the alliance of neoliberal transnational policies with regional mafias.

More than ten years since the mobilizations began to defend one of the most sacred altars of the Wixarika people from destruction, the inhabitants of the high plateaus of San Luis Potosí, the Wixarika people and diverse allies continue a struggle for the preservation of a biocultural treasure of Mexico and the world.

We insist that other forms of development are possible which are based on dignified sources for peoples’ livelihoods and economies based on solidarity and a reciprocity with ecology and humanity. For this reason, the defense of the high plateaus of San Luis Potosí depends on a fundamental transformation in our power relations where economic, political and social violence cease to exist as the motors behind development. Instead, civil society must unify our collective power for the conservation and restoration of our shared territories. As one small farmer whose family has lived for generations from the natural cycles of this geography, “all Mexicans should defend the water of this place.”

Stay tuned for a follow up story about the agroforestry project that the Wixarika Research Center is leading to bring together small farmers and Wixaritari in the protection of this sacred and biodiverse area of the Chihuahuan Desert.

Read the illustrated article for additional links and to see more pictures.