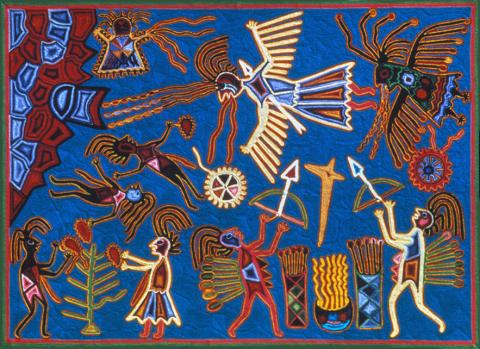 Tamatsí Kauyumarie, Our Elder Brother Fawn of the Sun, had escaped from the cannibalistic Hewixi with the powerful rain-gourd and arrows that Our Great Grandmother, Takutsi, had asked him to steal. Unable to find Tamatsí, the Hewixi decided to search for Takutsi. Many who approached her were rendered drunk or crazy by the powers of her magic, and they fell off the cliffs or killed themselves. But a relentless few reached her and threatened to kill her if she did not return their arrows and the sacred gourd. Takutsi told them that before they killed her they must learn more of her sacred knowledge. She said they must know how to remove their hearts from their bodies, and she pulled hers from her chest, which she then hung on a tree (at lower left), asking them to follow suit. As each Hewii removed his heart, he would die, while Takutsi would promptly replace hers in her chest. And so the last of Takutsi’s pursuers were destroyed.

As she continued on her way, Takutsi was met by Young Star Person, Xurawe Temai, and Tuamuxawi (previously referred to as Watakame, the first cultivator, until his departure to Our Mother Ocean). They had been looking for her to chant as the principal shaman for her people, the Tatutuma, who had congregated at the ceremonial center of Teakata, but with her blood boiling from her last encounter, she excused herself by saying she felt sick. Xurawe Temai and Tuamuxawi followed her insistently, but when they realized their pleas were useless, Xurawe told Takutsi they did not need her after all, for they had already learned something from her. This response angered Takutsi. When midnight came, she transformed herself into a beast, a nakawé. She appeared as a bat of many colors and with large eyes (at upper right). Her mouth spewed blood, which fell around Tuamuxawi and Xurawe Temai, creating a pool, called Takutsi Haapa, which is near the area known as the House of Our Mother, Tateikié. To this day its water is red.

The dripping blood made them realize that this horribly transformed creature was no longer the Takutsi they knew, and they shot their arrows at her (at lower right). The arrow of Xurawe Temai wounded the beast (at center), and she became visible again as Our Great Grandmother who lays the Foundations of the Ranches, Takutsi Kiekari Makame, in human form. “Now you have mortally wounded me,” said Takutsi, “but it was my own fault. You had the right to kill me. It is well.” She gave them her staff and her sacred gourd (at lower right). It fell between them in flames, which they doused in the blood of the red-water pool. Reflected in their nierikate (the disks above their heads), the two Tatutuma saw Takutsi’s image as an idol (at upper left) of Takutsitá, where she used to live. Takutsi asked them to carve this image from the wood of the kwayxuri tree and to clothe it with her dress made from cactus fiber. She saw her image, which was her “heart” and her spirit, calling her to the spot at the top of this high peak that has a hole near the summit. She directed her body where the rays of the sun fell on the hole.

A shrine was eventually built for Takutsi at the foot of this peak, where she dwells in image form. At their main temple center in Teakata, the Tatutuma built shrines for each principal ancestor. They placed Takutsi’s staff and gourd in her shrine so that she would always be present at their celebrations. They modeled themselves after these Ancestors and went to the sacred spots like Wirikuta, so that within five years they had learned some of the wisdom of Our Great Grandmother Takutsi. She was the most learned shaman and knew the words of all the sacred chants.