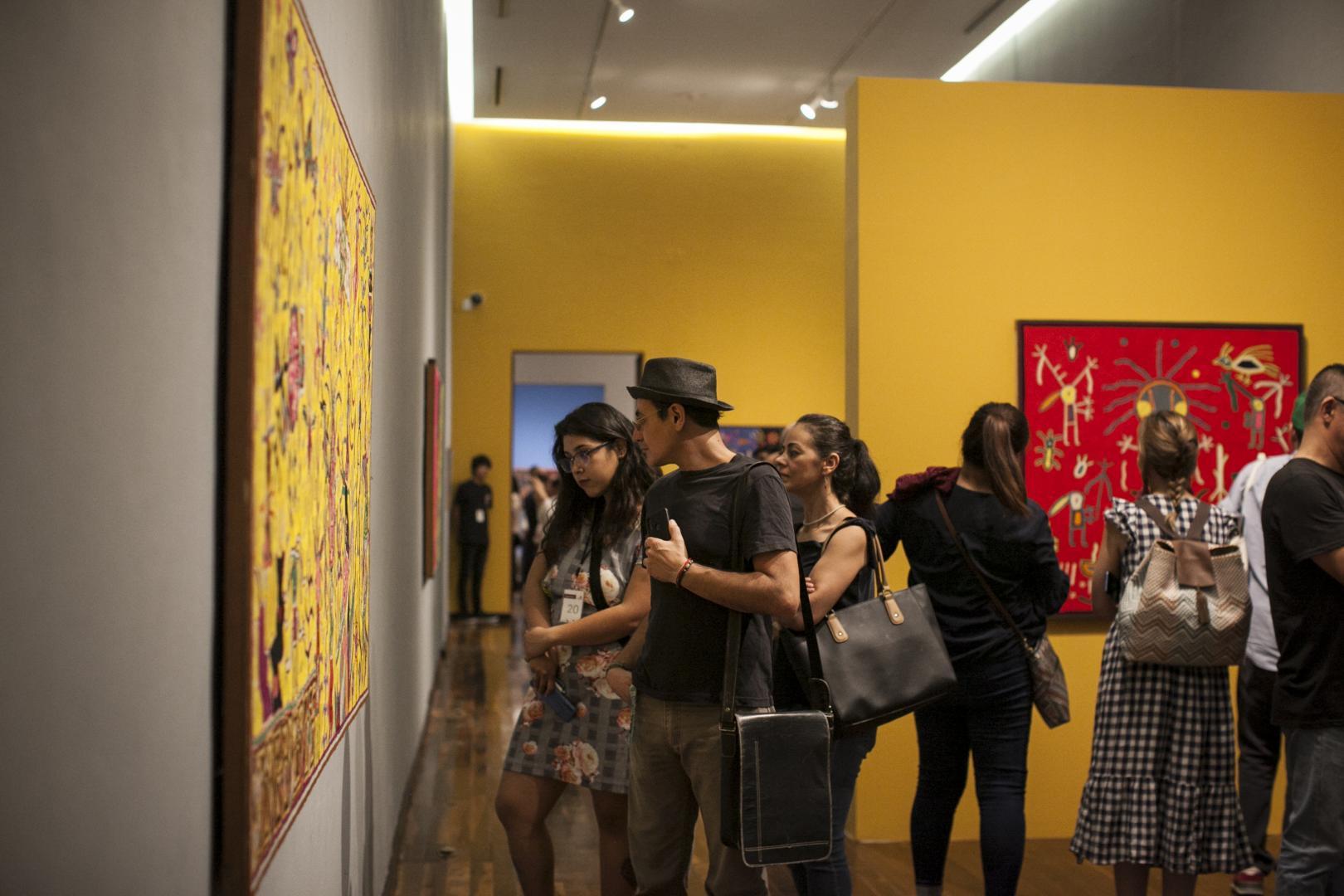 It is our hope that everyone is well and managing as best as possible during the crisis of the ongoing Coronavirus pandemic. We feel extremely fortunate and grateful that we have a safe place to work from and can continue to add new content to the WRC online archive while we shelter in place.

The Wixárika communities are taking precautions to protect their people from Covid-19. They have asked that outsiders refrain from visiting the communities and in the case of San Andrés Cohamiata / Tateikíe they cancelled their annual Holy Week for the first time in memory. Both the Government and the Wixárika people have shown initiative translating public service announcements and gathering essential medical and food supplies.

A major exhibit in México

At this time, we would like to bring you up to date on the work and activities that kept us so busy last year. In January 2019, we received a formal request to mount an extensive exhibit at the Museo Cabañas in Guadalajara as part of the international celebration of the Year of Indigenous Languages. In 1997, Cabañas was declared a World Heritage site by UNESCO and it stands as one of Mexico’s most important museums. The exhibit, Grandes Maestros del Arte Wixárika. Acervo Negrín, opened on June 20, 2019 and was scheduled to close on October 27, 2019. Because it was such an overwhelming success, the exhibit was extended until January 12, 2020, and was visited by 65,000 people.

Curated by Diana Negrín and coordinated by Yvonne Negrín, the exhibit consisted of 88 works of art drawn from five individual collections of yarn paintings, the majority of which were loaned by the Negrín family. The yarn paintings loaned by other collectors were all originally commissioned by Juan Negrín from the mid 1970’s through the early 1990’s. Although the majority of the exhibit consisted of yarn paintings of various dimensions (authored by José Benítez Sánchez, Tutukila Carrillo Sandoval, Guadalupe González Ríos, Lucía Lemus de la Cruz, Juan Ríos Martínez, and Yauxali Taizán), it also featured sculptures, textiles, photographs and a slide show of historical photographs accompanied by musical recordings by the yarn painters themselves. Using Juan Negrín’s recorded conversations with the artists, audio capsules were created for a select six paintings and Juan Ríos’s music was played as the background sound in the room dedicated to his art. Three generations of the Ríos family present at the inauguration took particular interest in listening to the audio. Thanks to Juan Negrín’s careful documentation and analysis of these selected yarn paintings, we were able to provide revised explanations for nearly every work on display. All of the explanations were translated for the very first time into Wixárika by a team of Wixárika teachers and linguists headed by Tutupika Carrillo of the Autonomous University of Nayarit. This was the first time the museum included indigenous language texts, and one of the few instances it has been done in any major museum space.

The exhibit was sponsored by the Secretary of Culture for the State of Jalisco, the Instituto Cultural Cabañas and the Wixárika Research Center. The inauguration was attended by close to 800 people including many Wixaritari and many children and grandchildren of the artists. Xitaima (Lucía Lemus de la Cruz), the only living artist whose yarn paintings were included in the exhibit, joined us and was one of the keynote speakers, addressing those in attendance in the Wixárika language. The widow of Guadalupe Gonzalez Ríos, now in her mid-90s, traveled with her son Fermín from their ranch outside of Tepic to attend. A renowned violinist, Valeriano Carrillo and his son, Pedro, from the community of Tuapurie traveled to Guadalajara to play traditional music for the inauguration. It was a memorable event that was attended by a large number of the urban Wixárika artisans and young professionals.

One of the biggest outcomes of this exhibit is the publication of the book and catalogue Grandes Maestros del Arte Wixárika. Acervo Negrín. A trilingual catalogue (Spanish, English and Wixárika) was published to celebrate the exhibition and can be purchased through our website’s store. This beautiful publication has 338 pages and more than 100 color plates of photographs, yarn paintings and other artworks. In keeping with our foundation’s mission, the exhibit and catalogue successfully helped promote public awareness and respect of Wixarika art, culture and territory.

This was the second year we coordinated with the International Friendship Club and the Rotary Club in Puerto Vallarta to award scholarships to Wixarika college students. While many students are able to get their tuition waived by the universities they are attending, the additional costs of books, transportation, housing and food can be overwhelming. This year 13 scholarships in the amount of $6,000 pesos each (approximately $300 USD) were awarded to students in Nayarit and Jalisco. These students represent various communities and they are studying a variety of careers. We received more than 22 applications from students who were all worthy, making the task of elimination very difficult. We have encouraged those who did not get scholarships this time to apply next fall. Of the scholarships awarded, 9 were covered by the International Friendship Club and distributed by the Rotary Club and 4 were covered by the Wixárika Research Center. Five of these students are continuing recipients from the previous year and two are due to graduate this spring. We hope to receive enough donations to increase the number of scholarships we can award for the 2020 cycle. We will soon be posting profiles of the recipients to our website and will send out notification and a link once posted. We would like to thank Brian McDougall for his tremendous commitment to this project through his fundraising and educating of the American and Canadian community in Puerto Vallarta.

Our new online archive is just over 18 months old and we still have plenty of work to do. But if you haven’t yet explored our postings, you are sure to find many new surprises. We have a new section called “resources” where we have posted videos, essays and books, and a much improved section dedicated to news and a gallery highlighting art. This year we will be working to organize and flesh out the section on art and to upload as many historical documents as possible. In order to make good progress we have hired an assistant to work with us several days a month.

During our current 2020-21 fiscal year we also want to return to working on the film footage that was so generously donated to WRC by Diana Fried in July of 2018. Aside from the Master copy of her documentary, New Day on the Mountain, Fried donated all the raw footage shot in 1987, along with all of her audio recordings and written transcripts. In September 2018, we hosted an event to introduce our new website and to raise money for the digitalization of the 880 minutes of raw footage which was in Sony U-Matic format. Through generous donations and the sale of vintage yarn paintings donated to WRC by our executive director, we successfully raised all the funds needed for the first phase of this project and were able to digitalize all 880 minutes of raw footage. Digitization was done at Zoetrope Aubry Productions (ZAP) and personally overseen by Kim Aubry. Kim also handled the digitalization of the Master 7 track audio tape through people he works with in Los Angeles. We thank Josh Morton and Christopher Beaver for their participation in this project and for connecting us to ZAP and Kim who had the necessary equipment to convert U-Matic tapes. They did a terrific job! Once we were able to view the footage we discovered there is abundance of valuable historical footage that can be posted to our website in the form of short stand-alone videos on the processes surrounding community-led forestry conservation in Wixarika territory. This comes at a time when forestry conservation continues to be a high priority for Indigenous communities in Mexico and across the globe. We discovered a number of interesting interviews in both English and Spanish that will be of interest to the Wixaritari and to students of their history and culture. Most importantly we feel it is very important to reissue the documentary with its original Spanish sound track. The original documentary sound track was dubbed over in English. With the original Spanish sound track in hand, we hope to reissue the documentary in Spanish for the benefit of the Wixarika people, particularly for the younger generations. We will be looking for a film editor who has interest in this project and is fluent in English and Spanish to work with us.

We began the work of digitizing important musical cassette tapes and have been working with Jim McKee at Earwax Productions in San Francisco who also put together the sound track for the slide show that forms part of the exhibit Grandes Maestros del Arte Wixárika. Acervo Negrín. The slide show includes photographs taken of the Wixarika by Carl Lumholtz in the late 1890’s and photographs taken by Edwin Myers in 1938. We have an agreement with Harvard’s Peabody Museum that will permit us to post the Myers photographs to our online archive and expect to have them up soon.

Finally, we would like to thank you all for your support over the years and wish everyone the best of health, happiness and peace in 2020. We look forward to bringing you more online exhibits and writings by indigenous and non-indigenous authors on the urgent political, economic, ecological and cultural matters that affect Wixarika people and land. If you are able, we ask that you consider supporting our work with a tax deductible donation that can help further our above mentioned projects.

The Wixárika Research Center is a 501(c) 3 non-profit foundation and all donations are tax deductible to the full extent of the law.

See the illustrated PDF of this newsletter for photographs.