The Birth of the Moon - needs translation 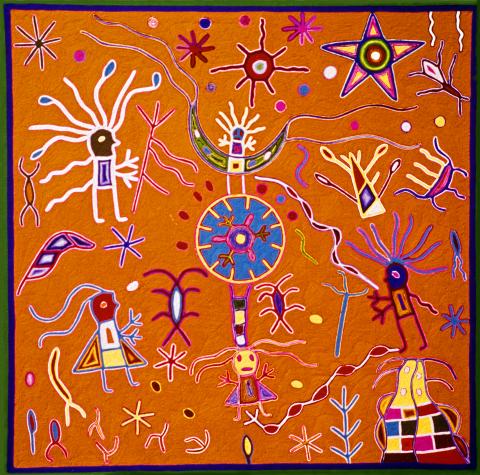 Tacutsi Metseri, Grandmother Moon, was a little girl once (lower center), who played with her toys, flowers, and pieces of broken clay. Tuamuxawe (at left) noticed the girl as he stood with his bamboo staff (in front of him). He took the path marked with red dots and grabbed her and dragged her away to the summit of Leunar, Burnt Peak. There he dropped her into the center of a hole, Muunarutsie, from which all the Gods resurrected. Five multi-colored squares represent the steps to the sacred blue area at center. At this time, the world was dark for the sun had not been reborn.

The mother of the girl realized that her daughter had been stolen. She called a shaman to help her. The wise man (depicted at right) consulted the leaf of the sacred Kieri tree (extreme right, below the shaman) and his plumed-arrow, muvieri. He told the mother what he saw.

Tuamuxawe was seen holding a nierika (red contoured form at top center), a mirror which reflects sacred visions, and he was casting a light along his path. After five days, the girl rose in the skies where she transformed herself into the moon. The moon gave birth to a star (top left). This star, Rurawe, and all the others were born to be her companions. The dots that link the moon and the stars are words Tacutsi Metseri speaks to her child.

Tuamuxawe traced signs with his staff to the left and to the right. Thus the moon was placed in a position from which it could send the proper amount of light.

Tumuxawe returned to Xapwiemeta, where he had started his journey. Above him fire is burning; it was born simultaneously with the moon. Tuamuxawe offers Grandfather Fire, Tatewarí, a decorated votive arrow.

Tacutsi Metseri, the moon, affects women in particular. The seven spots around the sacred blue area (in the center) represent menstrual blood. The moon affects flowers and the hardness of trees. It lifts the scent of flowers in the wind and carries it to the bee (upper left) and to the insects.

Tuamuxawe became a peak in Xapawiemeta. In the pale yellow area at the summit of this rock, there are four yellow areas where the sacred aspect of Tuamuxawe is present as a nierika on the rock. Pilgrims bring offerings to this brightly colored peak.

Explanation and translation by Juan Negrín based on a tape recorded conversation with the artist. Copyright ©Juan Negrín 1973 - 2018