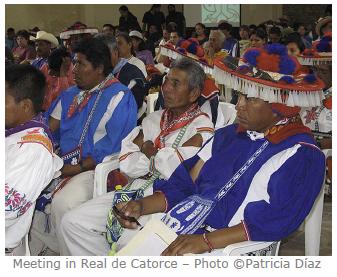 For the past seven months the Wixárika traditional and agrarian authorities have been actively working to bring about the cancellation of the 22 mining concessions granted to First Majestic Silver Corporation of Canada. For those of you who have not been following this news, the concessions total 6,327 hectares of which 70% are within the protected Wirikuta Pilgrimage Route and Reserve. The protected area consists of 140,212 hectares. The mother lode lies beneath Le’unax+, also known as El Cerro Quemado, one of the Wixárika people’s most sacred sites where they say the sun rose for the first time. Since time immemorial they have made this pilgrimage from the sierra to the desert stopping at many sacred sites along the way where they pray, leave offerings, and collect peyote and sacred water from springs to take back to their families and ceremonial centers. Unlike other historical events of centuries past, the loss or degradation of the sacred lands of Wirikuta would seriously threaten the cultural survival of the Wixárika people.

According to the World Wildlife Fund, the reserve protects one of the planet’s three most biologically diverse desert ecosystems. UNESCO identified Wirikuta as one of only 14 potential World Heritage Sites of both cultural and ecological importance. The Wirikuta pilgrimage route has been on UNESCO’S tentative list of World Patrimony since 2004. In November of 2008, the agreement of Hauxa Manaka was signed by President Calderón and the constitutional governors of the states of Nayarit, Durango, Zacatecas, San Luis Potosí and Jalisco, as well as by elected Wixárika authorities, giving additional protection to Wirikuta and other sacred pilgrimage sites of importance to the Wixárika.

On August 30th, the Union of Wixárika Artists and Craftsmen of the Metropolitan Region of Guadalajara issued the first public statement against the desecration of Wirikuta. On September 18th, a meeting was held in Real de Catorce and the coalition Tamatzima Waha’a was formed to defend the sacred pilgrimage route of Wirikuta. The Wixarika Research Center is a member of this international coalition is made up of NGO’s, legal defense teams, Wixaritari, other Native Americans and numerous individuals. Within days the Wixárika authorities of all the communities along with the Union of Ceremonial Centers issued their first statement: the Declaration in Defense of Wirikuta.

In late October, we received an e-mail from Paula Palmer the director of Cultural Survival Global Response. She told us that she had been hearing about our efforts to stop the mine and save Wirikuta and said she thought they could help. On short notice we worked to make the deadline for the story to be included in the December issue of the Cultural Survival Quarterly magazine. Cultural Survival’s Global Alert is an international letter writing campaign which is asking the Mexican government to cancel the 22 concessions granted to First Majestic and to honor the protections granted Wirikuta. Please visit the Cultural Survival website and participate in this important campaign. If enough people from all over the world join in this effort the Wixárika people have a better chance of winning this case. All of these efforts we have spoken of are complemented by the work being done by the legal experts in charge of stopping the Real de Catorce project, recently renamed the La Luz Project, based on the protections granted to the Wirikuta Pilgrimage Route and its importance to the cultural survival of the Wixárika people, an original Mexican culture.

In December, a number of Wixaritari traveled to Cancún to attend the Climate Forum and Cop 16 to call world attention to Wirikuta and the threat posed by First Majestic Silver’s project. They were interviewed by numerous reporters, both national and international, representing newspapers, journals, radio, and television. During their week in Cancún they formed many new alliances that have promised to help them in their struggle to save their sacred land. Nonetheless, the battle against this corporation remains formidable.

At the same time, the first meeting in Real de Catorce that included Wixárika leaders, government officials and personnel from First Majestic Silver was taking place. As was expected, First Majestic said that they were culturally sensitive and would keep a 2 kilometer distance from Le’unax+ in spite of the fact that the richest veins of silver, the Veta Madre, lay exactly beneath this most sacred spot.

In an interview, Robert Ayotte, the CEO of Normabec and subsidiary of First Majestic which carried out the exploration of the concessions, stated that the richest vein is the Veta Madre and goes on to say how the veins are both above and below the aquifer. Specifically, he says that below the aquifer they are looking at pure oxides – gold, silver, copper, lead, and possibly zinc. Ayotte also makes reference to open pit mining and the use of cyanide. All of the mines operated by First Majestic in Mexico are open pit and use cyanide to extract the metals although the company has made the claim that they will avoid such extractive techniques at their Real de Catorce/La Luz project.

Meanwhile back in Mexico, the issue of mining in Wirikuta was beginning to get more attention and coverage through major articles in the press and drew the attention of a Senator from the state of Nayarit, Francisco Javier Castellón Fonseca, who put the issue before the Mexican senate. On March 30, 2011 the Commission of Commerce and Industrial Development approved the proposition of Senator Castellón Fonseca to be read before the full senate where it was approved by all the senators on March 31st. The Senate of the Republic then issued a request for the Secretary of the Economy to exhaustively review the 22 concessions granted to First Majestic Silver for the exploitation of mines in the area of Le’unax+ in the sacred reserve of Wirikuta. The Senate also asked the Secretary of Environment and Natural Resources for the environmental impact study that would authorize this exploitation. At this point we are waiting for answers from the above two agencies and the Wixárika authorities are planning their next actions.

We will continue to keep you informed through the news section of our website and if you are on Facebook we invite you to join our group Huichol Cultural Survival where we are posting articles regularly in English and Spanish. In the meantime we ask you to support our ongoing work with a donation if you are able. Donations are tax deductible to the full extend of the law and very much needed.