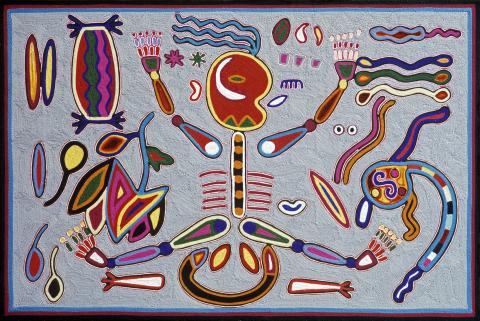 Watákame survived the flood that devastated the first world with the help of Tacutsi Nakawé, Our Great Grandmother Hollow-Ear, who predicted its arrival. Five years later the waters receded and he became the primordial Huichol cultivator discovering corn in numerous forms. He laid the foundations for man’s life on earth under the direction of Our Great Grandmother.

At the time of his death, the various parts from his body dispersed, and new plants were created from them. Here are depicted his skeleton and his vital organs:

In his red skull, the jawbone is white. One of his ears is behind his head. Two flowers symbolize his soul and memory. His hair flows on his skull. Three teeth are colored pink. Below them are an eyebrow and his white tongue. Above the teeth are his brain and inner ear lobe. His digestive tract is at right. His tendons, two blood vessels, his two eyes, his skin and an ear are dispersed around his bowels. Below Watákame are his sexual organs in three parts surrounded by two pieces of marrow. A large piece of flesh is depicted at top left. The three ovoid figures (at far left) are parts of his loin. His heart is attached below to his lungs and to other organs. Next to it is his yellow bladder. At the lower left corner are his spleen and his pancreas.

Watákame, also known as Tuamuxawi, gained his knowledge through many trials and tribulations, eventually acquiring the status of a kakaiyari (tutelary deity, located in a peak), and immolating his body at death.

Translation and interpretation by Juan Negrín based on a tape recorded conversation with the artist.
©Juan Negrín 1974 – 2020 All rights reserved.