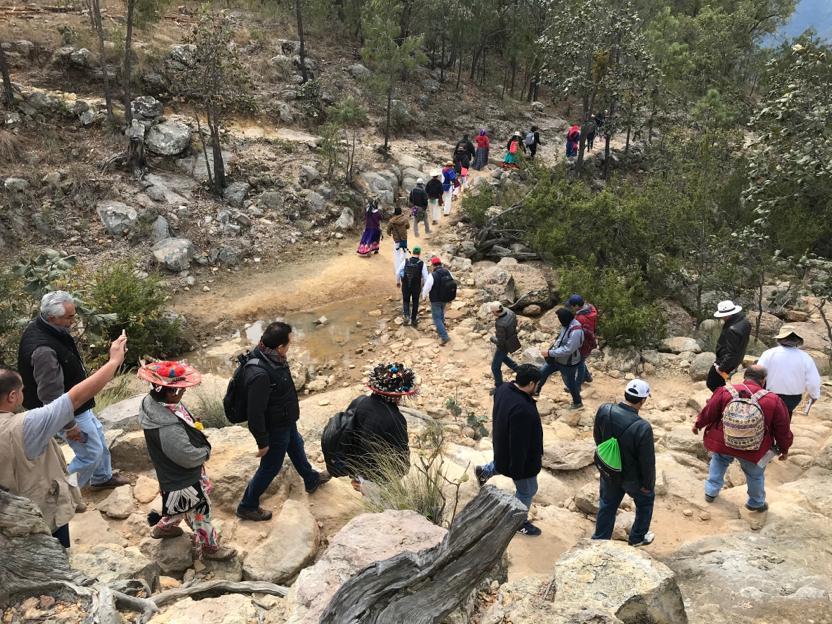 Mezquitic, Jalisco, February 2020.-  A historic day was lived in the ceremonial center of Las Latas, municipality of Mezquitic, in the indigenous community of Santa Catarina Cuexcomatitlán, where the ancestral culture has been preserved, where its girls and boys They communicate in the Wixárika language and women and men wear their colorful clothing on a daily basis. It is here that the wise elders are venerated, the territory is preserved with its sacred places and the universe is respected.

In its ceremonial center surrounded by hills and forests, high-level public officials had never arrived in past administrations, who simply ignored these communities and promoted their isolation, dictating public policies from desks in their offices, regardless of opinion. and the worldview of indigenous peoples.

Things have now changed thanks to the new style of governing within the government of President Andrés Manuel López Obrador, in which all sectors are listened to, but priority is given to economically marginalized people and indigenous peoples.

Under this premise and by presidential mandate, a large entourage of federal officials arrived at the town of Las Nubes, in the upper part, from where they undertook –guided by local men and women–, a walk along steep, stony and rugged trails that they descend over the ravines, to advance two kilometers to the ceremonial center of Las Latas, which hosted an unprecedented meeting with traditional and communal community authorities.

The wixárika governor of Santa Catarina Cuexcomatitlán, Pedro de la Rosa de la Rosa, described as a historical fact that the federal government, through the National Institute of Indigenous Peoples (INPI), came to this sacred center to dialogue directly with women and men, with their indigenous authorities, which has given hope to the communities and will allow them to move forward with the comprehensive development agenda that they have been proposing.

Meanwhile, the director general of INPI, Adelfo Regino Montes, endorsed on this ceremonial site that one of the priorities of this government is indigenous peoples, in particular the wixárika, after the work agenda was delivered on December 5 between Santa Catarina Cuexcomatitlán and the Government of Mexico, whose content is served by various agencies.

Accompanied by the commissioner for dialogue with indigenous peoples of the Ministry of the Interior (SEGOB), Josefina Bravo Rangel and the delegate of the person in charge of the Welfare programs in the state of Jalisco, Armando Zazueta Hernández, stated that this dialogue table has been Devised to care for the communal assets and sacred territories of the Wixárika people, because it is a presidential mandate.

In the presence of representatives of the Secretariats of Welfare; Rural Development (SADER) and Agrarian, Territorial and Urban Development (Sedatu); the Federal Electricity Commissions (CFE) and the National Water Commission (Conagua); The Agrarian Attorney (PA), the National Institute of Indigenous Languages ​​(Inali) and the Jalisco State Human Rights Commission (CEDHJ), among other instances, Adelfo Regino offered to attend to territorial and agrarian, educational and health, among others, prioritized by indigenous authorities.

Together with the directors of the main INPI areas, he cited that when a community preserves and cares for its communal lands and respects community life, it will be able to prevent external factors focused on individualism from advancing, “that is why thanks to the fact that there are communal lands there is strength of our culture and traditions ”.

He expressed that the issue of safeguarding culture, territories and sacred places must be addressed with utmost responsibility with other agencies, because it is a special instruction from President López Obrador.

Adelfo Regino reported that they are going to promote the hydraulic concrete road scheme that has been successfully undertaken in the state of Oaxaca - where the communities themselves exercise the resources and carry out the works - so that it is applied in this area of ​​Jalisco with the Due technical analysis, to integrate the projects in the headwaters of Santa Catarina, San Sebastián and San Andrés.

He considered that firstly the section from Nueva Colonia to Las Latas will be studied, with respect to the sacred places and cultivation fields, as well as the vehicular bridge over the Los Cajones stream, which the same communities have proposed.

For his part, the delegate of the Secretariat of Welfare in Jalisco, Armando Zazueta Hernández, explained to the attendees the various programs and supports that this government has implemented for the benefit of older adults, young entrepreneurs and people with disabilities, as well as others oriented to the promotion of the family economy that are open to all the families of the wixárika people.

He commented that integrating centers of the federal government will be put into operation, in which it is contemplated to install branches of the Banco del Bienestar with ATMs, which serve the beneficiaries of federal programs so that they do not have to travel long distances to collect their resources .

After a whole day of dialogue and exposing the needs of the communities, an agreement was drawn up where requests were made for the maintenance and construction of roads and health centers with personnel and medicines, the strengthening of traditional medicine, introduction of electrical energy, provision of permanent drinking water systems, solution to territorial and agrarian conflicts, educational infrastructure with classes in the Wixarika language, supplies for the homes of indigenous children and application of the different Well-being programs, among others, that each of the dependencies will attend to the extent of its possibilities.

The federal government's meeting, moderated by INPI with the Wixárika people, overflowed with culture and color, with traditional indigenous ceremonies led by the 5 priests in charge of the Las Latas ceremonial center and with dances rarely seen by people outside the place in the sacred center itself.

This is how these indigenous communities expressed their desire to collaborate with the new government that –for the first time– listens to them, gives them a voice and respects their right to decide on their present and future, on their territories and comprehensive development projects attached to its culture and traditions.

Almost at midnight the entourage led by the head of the INPI, Adelfo Regino Montes, started on foot and in the dark to return up to the town of Las Nubes, in the upper part of the mountain, leaving a good taste in the mouth for this direct dialogue with the wixárika women and men, who provided hot food and drinks for all attendees, amid the cold weather that plagued the region throughout this day.