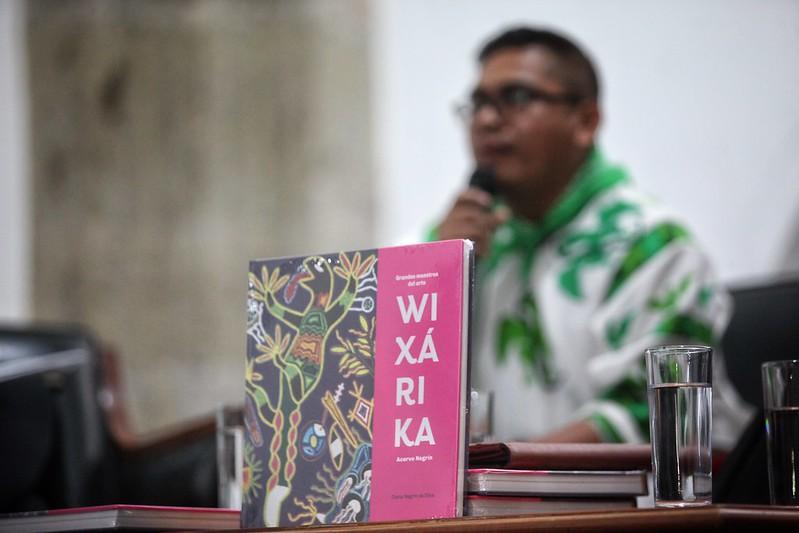 The catalog "Great Masters of Wixárika Art, Juan Negrín Collection", which includes in its pages modern Wixárika works of art and texts that delve into the collection of the same name, was presented on January 11th by authorities of the Jalisco Ministry of Culture (SC).

Before a large audience, the catalogue was presented in the Main Chapel of the Cabañas Museum within the framework of the closing of the exhibition "Great Masters of Wixárika Art, Juan Negrín Collection".

The catalog inspired by Juan Negrín Fetter's collection "is a bet against time, against oblivion," said Giovana Jaspersen García, Culture Secretary of Jalisco. She emphasized that this compendium perpetuates the millennial wealth of the wixárika people so valuable to the entity.

"We needed this catalog so as not to forget that the great teachers of Wixárika art have names and faces, and that this is the only way to equality, from the diversity of voices and views," she stressed.

The exhibition that closed on January 12 presented 84 pieces of around 150 existing in the philosopher's collection, among which are textiles, sculptures and yarn paintings of large and medium format, made by the Wixaritari artists José Benítez Sánchez, Tiburcio Carrillo Sandoval, Guadalupe González Ríos, Lucía Lemus de la Cruz, Juan Ríos Martínez and Pablo Taizán de la Cruz.

In addition to the exhibit, 90 parallel activities were carried out, attended by 2,500 participants. The workshops of Ojo de Dios and the cinema functions stand out.

The publication is an intercultural dialogue written in Spanish, Wixárika and English with images of the collection, photographs of their authors and their people, accompanied by texts by researchers on rituals, prayers, trances and ancient wisdom.

The curator of the exhibition, Diana Negrín da Silva, was in charge of the edition and spoke about her father's closeness to the Wixárika people. She also explained Juan Negrín would choose his destiny for his family forever, after being surprised with the works of art that he saw outside the Zapopan Basilica in 1970.

Diana Negrín also shared that from there her father dedicated himself to supporting these artists and recording the wealth of their territory, their language, their practices and their worldview. These testimonies make up the catalog.

For his part, Tutupika Carillo de la Cruz, a researcher at the Autonomous University of Nayarit and responsible for the translation of the copy into the Wixárika language, said that this great work “was discussed about three years ago and today it is finally tangible. Wixárika art constitutes the visual representation of our worldview and combines the thought, language and territory of this community. But especially I want to refer to the Wixárika language without which this catalog would be incomplete ”.

In his turn, the academic Guillermo de la Peña defined it as "a great feat to have preserved the heritage that gives life to the catalog." He highlighted the didactic sense of the edition and its narrative that show the contemporary creativity of the wixarritari.

The publication is the first of its kind carried out by the SC in conjunction with the “Alejandro Díaz Guerra” Foundation, the William R. Hearst II Foundation, and the Zacatecan Institute of Culture. Its circulation was one thousand copies. It is available for sale at the Cabañas Museum and at the Ex Convento del Carmen.

Juan Negrín and his collection

In 1970, Juan Negrín Fetter, a young philosopher and artist, visited an exhibition of paintings by wixaritari artists outside the Zapopan Basilica. In a few years, Negrín, accompanied by his wife Yvonne Marie da Silva, wove strong bonds of friendship and collaboration with five Wixaritari artists and their families. They traveled with them throughout the Wixárika territory and focused on the defense of the territory, the forests and promoting their artistic manifestations.

For 44 years, Juan and Yvonne opened commercial channels so that the Wixárika communities could sell their work in Mexico and abroad. Together, they promoted autonomy, through the opening of workshops where the wixaritari were able to develop their artistic products. Likewise, Negrín became one of the first collectors of yarn paintings and figures with beads, among others.

In the 1970s and 1980s, Negrín sponsored the creation of a collection of multi-dimensional wool yarn pictures. Now those paintings by José Benítez Sánchez (whose best-known work is in the Juárez station of the Light Rail), Guadalupe González Ríos, Juan Ríos Martínez, Pablo Taizán de la Cruz and Tiburcio Carrillo Sandoval form an invaluable and unique heritage in the world that allows them to be recognized as the masters of modern wixárika art.