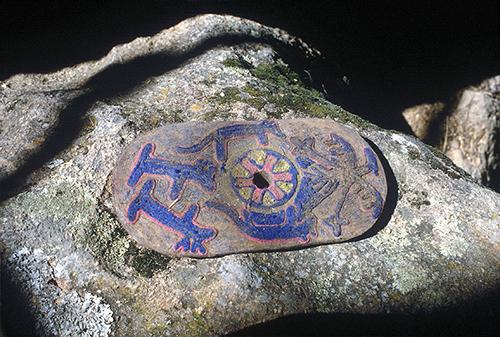 The nierika is represented among the Huichol Indians of northwestern Mexico as a focal point on which powerful beings concentrate their energy. This may be as primordial as a well-crafted deer snare that induces the sacred animal’s willing self-immolation. It can be a symbolic spider’s web or threads attached to a wooden loop. Nierikate (plural) are holes penetrating the caves of the heart of darkness in the deep canyons and the crater of Burnt Peak, where Our Father rises from the underworld at dawn. They are depicted as cavities in the center of stone disks, teparite, that permit the rays of the sun to receive and transmit the visual messages of Our Ancestors from their shrines to all the places beyond, in a seven-tiered space: the four corners and the center on this plane, and the world above and below. There is a tepari porthole in the back of each shrine and one over its doorway; others may be inside, either covering or serving as altars to images of corresponding standing ancestors, memuute. The insight that a nierika gives healing shamans enables them to diagnose the cause of an illness and locate its source within the ailing person’s body.

Nierika is also a mirror that reflects images of Our Ancestors for the pilgrims at the gates of Wírikuta, the land “where Our Ancestors paint designs on their faces.” First the pilgrims deposit gourd-bowl offerings, xukúrite, symbols of the womb, and take sacred water from the oasis of Our Mother of Birth and the source of eastern waters, Tatéi Matinieri. Later, they paint their faces with a yellow root near another oasis that likely has served as a mirror since primordial times. Once the pilgrims have purified themselves by fasting and confessing their sexual taboos, they reach Wírikuta, when they hunt the sacred deer that offers its heart as the peyote cactus to the seeker of visionary insight. Thus, peyote is a source of nierika in itself and it frequently symbolizes the concept of nierika.

Pilgrims and shamans carry mirrors (called nierikate) in their baskets so they can paint symbols on their faces that represent the ancestor whose name they bear during the five-year pilgrimage cycle. These icons symbolize different ancestors, and are applied in the shapes of radiant prototypes of seeds, rays or clouds. The pilgrim’s yellow-painted face is itself a nierika, and a reflection of the ancestor whose path is followed, because he or she has been blessed by the rays of Our Father who rises in the east at dawn.

One of the fundamental meanings of nierika is a metaphysical vision, an aspect of a god or a collective ancestor, which is the term the Huichol use to refer to deities. Another meaning is “front-shield,”  which we interpret as a shield against temptations or distractions along the ritual path. No doubt in precolonial history, shields represented a significant defense against weapons of combat, but they are now symbolic objects attached to votive arrows with bamboo and yarn, or wood-and-wax-embedded objects. The votive nierika is generally a round offering, symbolizing an ancestor and prayer offerings sanctified by the blood of a sacrificed animal. Most recently such offerings have even been made as drawings on pieces of paper. 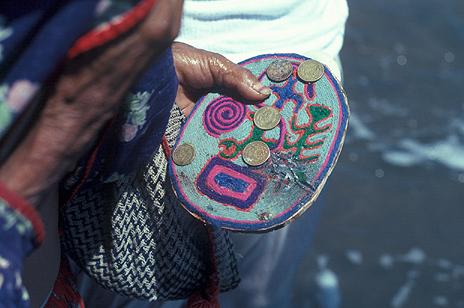 As Lumholtz stated, for the Huichol a nierika means a picture, an appearance, or a sacred representation. It evokes an ancestor, thanks it with blood offerings, and invokes its favors. Its root is in the verb to see: nieriya.    When the image is not round, it may be considered a resting mat for the ancestor, or a prayer mat: itari. Nowadays, we do not see the elaborate interwoven back-shields that Lumholtz called namma, which resemble the origin of yarn paintings. These were generally rectangular or square, with the yarn woven onto a grid of bamboo sticks.

Our Great-Grandmother Hollow-Ear, Takutsi Nakawé, whom the Huichol identify as the oracle and the primordial mother of Our Ancestors, is characterized by her nierika mask that reveals her masculine alter ego as Naurú, the chanting shamanic ancestor of seminal fire. Lumholtz identified the general meaning of Takutsi Nakawé as Our Grandmother Growth; that is metaphorically correct but does not correspond to her semantic roots: naká, for ear, and wekí, for hollow. As he reported, she was the ancestor who was able to predict the great deluge that flooded the previous underworld.