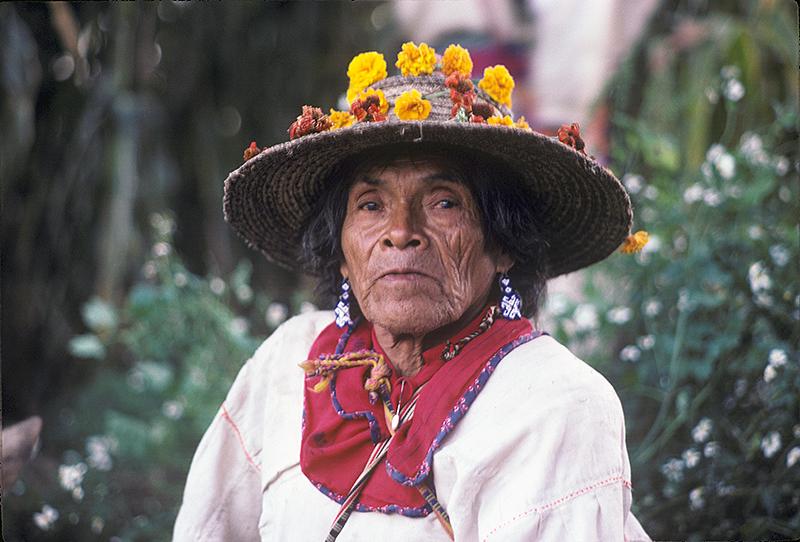 The Huichol (wee-CHOLE), known as huicholes in Spanish, and as Wixaritari in their own language, are recognized as one of the Mexican native cultures most resilient to outside influences. Unlike most other Indians, they did not allow Catholic priests to perform mass within the three main communities in the Huichol mountains, except sometimes on Huichol terms just before Easter, and in one community, at a couple of boarding schools. Recently, the Huichol expelled the Catholic priests and nuns from these communities with the exception of the mission at Santa Clara in the community of Tatei Kié. The presence of missionaries has been very restricted due to opposition from the Huichol and the Catholic establishment in the surrounding states. In the heart of their territory, visitors are not welcome, especially if they are foreigners and do not have a connection to prominent members of the community. People are literally placed in medieval stocks as a punishment for bringing cameras or using tape recorders without permission.

It took the Franciscan missionaries until 1737  to lay the foundations of their first “convent” within the traditional Huichol community center of Wautüa, San Sebastián Teponohuastlán; they were consistently frustrated in their proselytizing efforts, both there and in the other core communities, which retain to this day their pre-Hispanic beliefs and activities. As recently as 2003, when several Huichol families became converted to Protestantism, they expelled these members, called ‘aleluyas’, from the communities of Tuapuri, Santa Catarina Cuexcomatitlán and Tatei Kié, San Andrés Cohamiata.

Some scholars, relying on the Norwegian naturalist Carl Sofus Lumholtz, have assumed that the native name for Huichol—Wixárika, singular form—means “healer,” as Lumholtz was told by some of their Mexican neighbors when he did the first serious studies of these people between 1895 and 1898. The Huichol are still respected among their neighbors as healers, and their knowledge of medicinal plants is exceptional. However, not all Huichol are shamans or healers, as this translation would presume. Indeed, their knowledge of plants is highly prized, as a few recent investigators have verified.  A few years after Lumholtz’s studies, the French ethnographer, Léon Diguet concluded that the same word actually derived from a Guachichil word, which means “cultivator of the fields.” Contemporary Huichol do not agree that their name reflects either of the above connotations from an etymological or a descriptive point of view.

According to Yauxali, a chanting shaman, their native name Wixárika (or Wixálika in the lisping pronunciation of a child) means “those who dress in honor of Our Ancestors.” Yauxali explained that his name related to the “garment,” xali, of “the father,” yau, i.e., Our Father Sun. Other informants have told me that xali denotes the paint that is used to decorate the shaft of votive arrows that are prepared before sacred deer hunts to invoke the deer’s immolation.