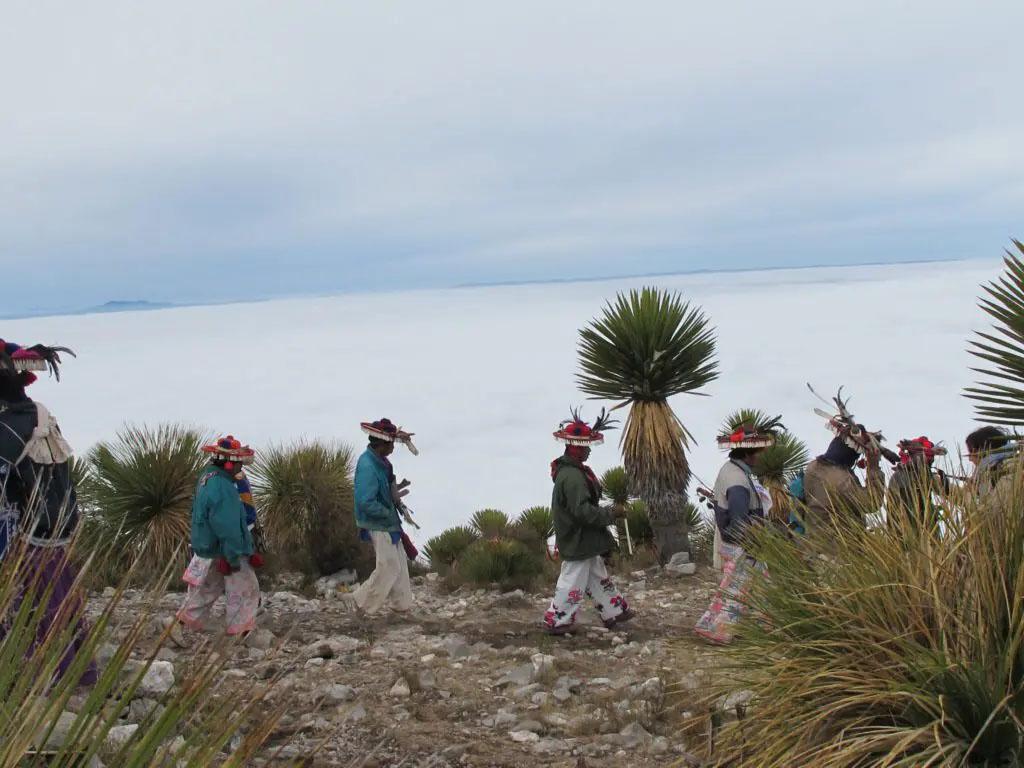 It is that time of year again, when, since time immemorial, the Wixárika people are preparing their offerings. The candles of life, the chaquira gourd bowls, the God’s eyes, the prayer arrows. They are beginning to retrace the arduous journey of their ancestors, carried out every year in sacred reciprocity for the gift of life. Their destination is the desert of Wirikuta, one of the five cardinal points in their sacred geography, where they collect their sacred cactus, peyote, and pray for the rain, for divine guidance, and for the balance of life on Earth. And in each of the countless points along a millennial route, they leave their offerings in a sacred duty to keep the Candles of Life burning, to maintain the balance of life on the entire planet. This year, however, is different. This year, people from all over the world are responding to an urgent call made by the Wixárika leadership to the world to support a mass ceremony, a powerful prayer to renew life on Earth. The call is an echo of a similar one a decade ago, when another mass ceremony was held to pray for protection from transnational mining companies. The mines were halted, at least until now — but today a different, more diffused menace faces Wirikuta — and the world.  And at the same time, thousands from around the world will join them in prayer, each from their own “mirror altar.”

On March 18, 500 Wixárika people from all over their extensive territory in the Western Sierra Madre will make the long journey to converge on the Cerro Quemado, the sacred mountain at the heart of Wirikuta, to respond in unified prayer and a traditional ceremony for a renewal of the Candles of Life – and for a restoration of the badly damaged balance of life on Earth.

This year’s letter of invitation, issued in late December by the Regional Wixarika Council and the Committee for the Defense of Land and Water of Catorce, explains that the call for a ceremony arose as a revelation during last year’s ceremonial process to pray for rain in Wirikuta: that “the lack of rain is one of the signs that shows that our world is seriously out of balance.” Many mara’akate or spiritual guides from the Wixárika territories were receiving the same message that an Earth Renewal Ceremony was needed to “renew the relationship humanity has with nature” and “reverse an imminent world catastrophe.”

Wirikuta is seen by the Wixárika and many others as a sacred altar that is key to maintaining planetary balance – a temple on the level of the Vatican for Catholics. But this UNESCO-recognized biocultural heritage site, one of the most biodiverse desert ecosystems on the planet, is being decimated by an aggressively expanding agroindustrial sector – factory farms of pigs, eggs, cattle, tomatoes, berries – and an insatiable international demand for the peyote cactus, trafficked as a drug by the cartels. The Wixárika people see this destruction as a microcosm of what is occurring on a global scale, and it is key to the multiple crises unfolding in these times.

“We have reached a very alarming and sick level of human life, of the world and the disconnection of our relationship with nature,” wrote the organizers of the event. “For us, Nature is our parents and our grandparents, and we have forgotten and mistreated them, and that is the cause of so much illness and death that we are experiencing. Our work is an effort to change that relationship. We are trying to reach deep into our roots to ask together through a prayer for a change that renews life and our commitment to care for it.”

In the same letter, they asked people to support them from wherever they are: “We want you to support us from your places of origin, collectively in public places or individually, or with your family in your homes, supporting us with your prayer and your creativity to add your energy in the transformation that the deities of nature ask us to sustain life.”

An invitation was sent out to the world community to create “Mirror Altars” – creative representations of the intention to renew the relationship of humanity with nature — and to synchronize prayers and intentions with those of the Wixárika elders for the March 18 event. All of the Mirror Altars from around the world will be broadcast live on that day from a social media network that has been created for this purpose.

“All live creative manifestations are welcome; dance, theater, music, paintings, graphic and visual expressions, rituals, offerings and all free creations that serve as resonant mirrors to the heart altar at Wirikuta,” said the letter.

The diversity of participation, they wrote, will add to the force of the “Ceremony of Renewal of the World”, encouraging “projects of equilibrium and order at the Great Altar of Universal Consciousness that is Wirikuta.”

The proposal has gone viral, organized by a collective calling itself Wirikuta Flor de la Conciencia (Wirikuta Flower of Consciousness); so far there have been more than 300 initiatives coming from all over the Americas and as far as Berlin, Senegal, Indonesia and France. Top artists like Alex Lora of the Tri, Roko Pachukote of Maldita Vecindad, Hector Buitrago of Aterciopelados and Rubén Albarrán of Café Tacuba have come forward with statements, as have actors and academics from across the spectrum.

The Wixárika people and their allies are calling for support for this mobilization, in two ways.

First, to help cover the costs of the ceremony, which exceeds the humble means of the Wixarika people. You can pitch in to help with transport, candles, food, materials and supplies in any of the ways listed here.

The second way is to create an altar and join the prayer from a distance, each in their own way. You can browse the lineup of Mirror Altars that have already registered and share your own by messaging Wirikuta Flor de Consciencia on Facebook or Instagram, or sending an email to altaresespejo@gmail.com.

In the words of the organizers, from their letter convoking the world to join them:

“The Wixárika peoples have shared with us the virtue of walking, singing and honoring the memory of how humankind plumes with consciousness like a snake that is born of the sea and ascends to the summit of the Sierra de Catorce, guided by the oldest brother, the blue stag “Kauyumari”.

“The planet is unbalanced and in a certain way, dying. This work has in its song, the vocation to restore the roots of the river of light that gives us life. It is to remember the human lineage, it is to call fertility and honor it by multiplying and sharing its gifts.

“This work of world renovation sows the seed of consciousness and asks for respect for Wirikuta, Mother Earth and the Nature Ancestors. This call to every corner of the world is an invitation for all to join to this initiative of unity, cooperation and creativity.

“Because Wirikuta is not for sale. It is to love and to defend.”

We encourage you to click here to see the original and fully illustrated article.